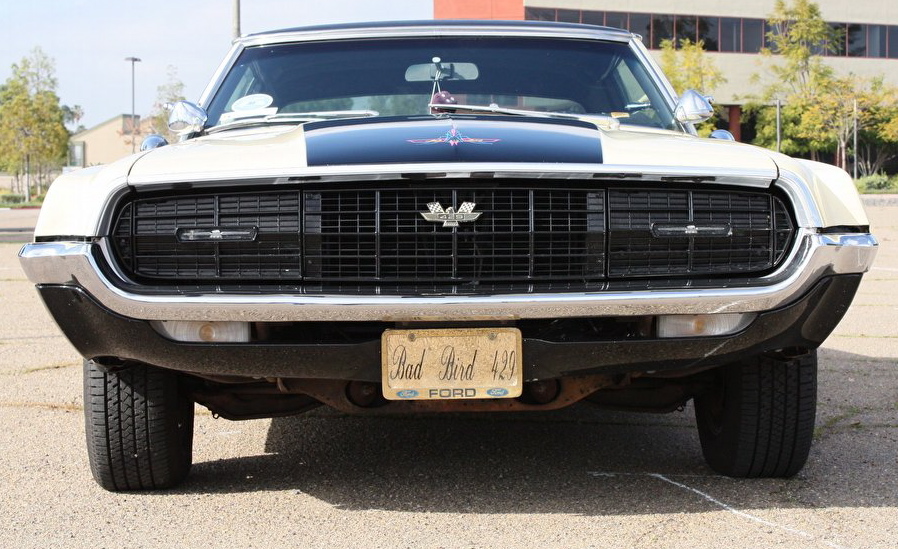 We call her “Thelma, the Bad Bird.”

Initially a docile 42,000-mile, one-owner car purchased in 1998, this original 1968 Magnolia Yellow Ford Thunderbird 429 landau coupe underwent a transformation to become a “ Bad Bird.” I put on a little more than 18,000 miles in 16 years that I owned the car.

Modifications included Pertronix ignition, custom exhaust , black-out powder-coated grille, two-tone paint and pinstriping. A Thunderbird theme — including a tribute to our troops with the American Eagle on the back window — and a real Eskimo thunderbird on the trunk with functioning Unity brand spotlights, make it unique.

All of these “touches” contribute to an individual but stylized look. With American Racing wheels and dual exhausts behind the rear wheels, the appearance was anything but docile.

When I originally posted the car for sale and made reference to the car on the cover of Hemmings Great American Cars of the ‘60s 2001 Calendar, I received nothing but “ridicule” for desecrating the classic look (some thought the original landau bars were “add ons!”). This was in distinct contrast to show awards and numerous “thumbs up” I received while I owned the vehicle.

However, that commentary did not stop admirers from Norway — and one from Pennsylvania who spotted the car on eBay – wanting to purchase it. Shipping and import duties made it difficult for that Scandinavian buyer. A former 1968 Thunderbird owner from Pennsylvania had the interest and trust in the 60,000-mile car to purchase a one-way airplane ticket with the expectation of driving it home after checking it out.

Following his own test drive, he asked me to drive him so he could be a passenger and check out the ride. We did a little test run on a straight road. With my hands off the wheel — to validate the front end alignment – the car ran laser straight. He was comfortable that the car would make it home.

But the driving proof was confirmed when I asked him if he “felt that?” Felt what, he said. Felt that we were just passing 105 mph with no shakes, rattles or rolls. Ice-cold air, electric windows and sheepskin seat covers made this “Bad Bird” the ultimate “rolling living room.”

To all the naysayers of my changes in the original appearance – you missed what was most important and that is the appreciation of a classic style — a matter of individual, personal taste.

To those who enjoy the freedom of the open road and a “good old car” with everything working, I say “oorah!”