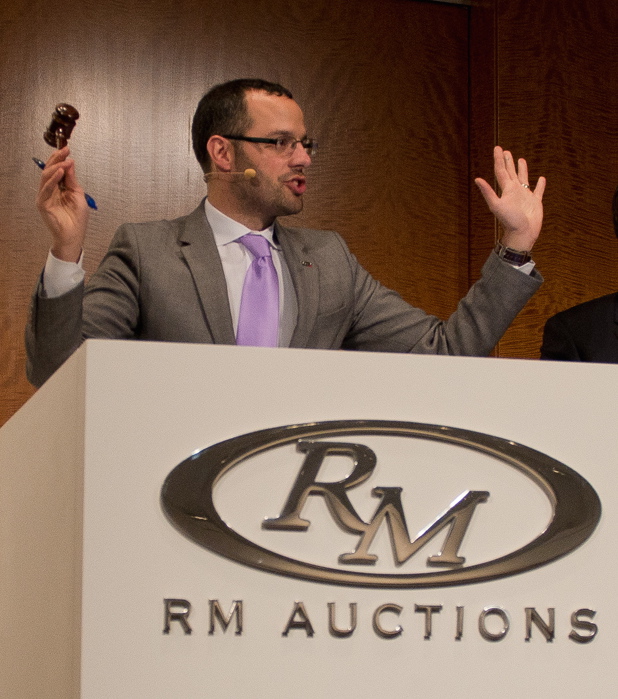 Max Girardo joined RM Auctions in 2006 to launch the company’s European headquarters in London. Still a few years shy of his 40th birthday, he’s a multi-lingual native of Melbourne, Australia, who already has lived in Italy, Singapore, Thailand, Indonesia, Hong Kong, Switzerland, Monaco and London. In addition to being a car specialist for Brooks (now Bonhams), he was a principle in CARS Europe, a logistics company that shipped high-value cars and classics for customers around the globe. He also is a passionate vintage racer. However, our conversation focused on his perhaps unexpected role as RM’s auctioneer, the man with the gavel.

You were a car specialist before becoming an auctioneer. How did you enter the business?

I’ve always been a car person and worked with classic cars all my life. It’s in the family. We didn’t have old cars, but my Dad did some amateur rallies and had the car passion.

I was working in a pub while going to university. An ex girlfriend came in and said in she’d seen an advertisement for a job with Bonhams. I started as a gopher, getting sandwiches for lunch, then did research on cars, and photography. I became a car specialist, going out and looking for cars to consign to the auctions.

At RM, how did a car specialist become an auctioneer?

We had an automobilia sale at Amelia Island. The day before, (RM founder) Rob (Myers) said, “Hey, Max, you do the sale tomorrow. I’ll see if you’re any good. If you are, I’ll send you to auctioneer school.” I didn’t sleep that night.

I did the sale and Rob said, “Your O.K. I’ll send you to school.” I went to Reppert auction school at Auburn, Indiana, for two or three weeks.

Auctioneering is what everyone sees me do, but it’s only a tiny part of what I do.
I still do all the other stuff. The auction is only three to five hours, depending on the sale. My week is still seeing cars and trying to get cars for the right sale, and running all of the business in Europe.

Do you know ahead of time who is going to bid on which cars?

You don’t know everything, I cannot tell you who’s going to buy that car. But I may have an idea of who’s interested in buying it. With 1,200 people in the room (at Monterey), it’s impossible to know everybody. But my day-to-day job is valuing cars and talking to people about cars, so I know the clients.

You appear to have a wonderful rapport with the bidders. Are you more a ringmaster or a standup comedian?

Ringmaster. A ringmaster who’s having fun. But I always thought it was more of an orchestra conductor, and I can wave my wand at people, like a whip, because it’s quite difficult to keep 300 people or 1,000 people interested, focused and behaving properly.

How do you identify the bidders in the room?

The bidders generally are quite good at waving to me. And I have a relationship with a lot of our clients. I know who you can push a little and who you can’t push, who really, really wants the car and who’s bidding just because he’s bored.

When you’re on the podium, do you know the identity of the telephone and Internet bidders?

I have a pretty good idea, though the Internet is more difficult. But it’s funny, you can tell who is on the phone or Internet by how they’re bidding. One year we were selling an Hispano-Suiza at Monterey and I could have told you who was bidding just by the amounts he was bidding. After the auction I called him and asked, “Was that you?” It was.

How do you keep the bidding going and the drama building?

That’s very difficult. It’s down to how much they want the car. You can look at somebody’s body language, their expression, their eyes, and you’ll have a pretty good idea if they’ll bid again. And you know when to back off and, yes, sometimes they get a little bit grumpy with me.

Is your goal to get prices as high as possible?

That’s the auction, isn’t it? Really, it’s not to extract as much as you can but to make sure the car is sold to the person who’s willing to pay the most. The true market value is reflected in what someone’s going to pay for it at this certain time on this certain day. Once the car is up there (on the block), you’re working for the seller.

I think about what the car is worth, it is at a fair price, and is everyone having fun? I believe the whole experience should be fun for everyone, though there’s always going to be one person, the underbidder, who is going to be disappointed.

Is the underbidder a good candidate for bidding on the next car?

No. The next car might be a car in which he has no interest. On every car, you start from zero again.

Are auctions different here and in Europe?

How often are you surprised by the way an auction unfolds?

There’s a surprise at every auction, cars that sell for more than I expect, cars that don’t sell, or a certain person buys a certain car and it comes out of nowhere.

Auctions or racing, which is more fun?

Because I race for fun, I say race. Hand on heart, when you put your helmet on and you’re at the start line, it’s very exciting. But when I put the microphone on a few minutes before getting on stage, I almost get the same feeling, and like the race car, the first few corners are terrifying, but then it settles down and I’m fine, I’m in the zone.

What do you want to do when you grow up?

Just to play with cars as much as I can, although maybe I don’t want to grow up.
I love the cars and the people who go with them, so many people from completely different backgrounds who all come tougher for the same passion.

What are your expectations going to Monterey?

It will be great. The great cars that are there will sell very, very well. The cars that are not so great will not sell as well. As prices go higher and higher, people are more careful with what they’re buying. It will be a fantastic sale, but it will all come down to the quality of cars. We’ll see some great prices for some great cars.