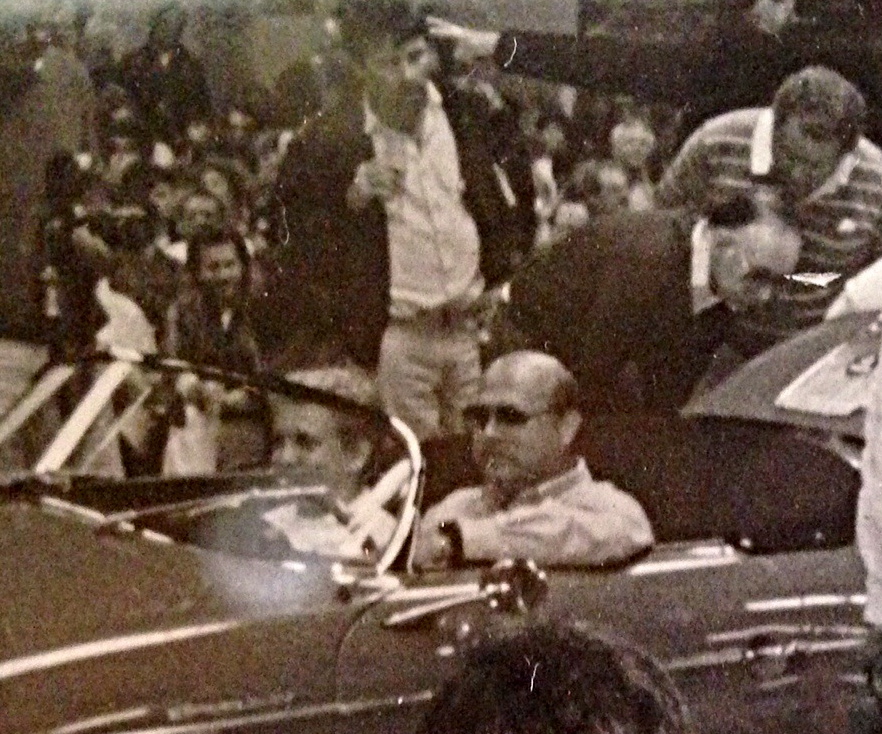 Seriously, we are not making this up. The following is the Top-10 sales list from the inaugural Monterey Sports Car Auction held on the Friday evening of the Monterey Historics/Pebble Beach weekend in 1986, less than 30 years ago. As they say around some poker tables, read ‘em and weep:

That auction, and those that followed for the next decade or so, was staged by Rick Cole, who had been involved in classic car auctions since he was a teenager working on the West Coast for Dean Kruse. Cole said that after Kruse defaulted on a hotel bill in 1978 and lost his Southern California auction venue as a result, Cole set out on his own. He quickly gained fame for buying and selling cars for various Hollywood stars.

No one had ever done this.”

[/pullquote]Cole also became involved in the new sport of racing old sports cars. While competing at the Monterey Historics, he saw people buying and selling cars in the paddock and thought a classic sports car auction might be a nice third leg on the Monterey/Pebble Beach weekend calendar.

“I didn’t really know what to expect,” Cole said in a recent interview with ClassicCars.com. “No one had ever done this. It was the first sale that was specializing in sports and racing cars. I’d come from a background working for a hick Indiana company that specialized in ’31 Model A Fords.”

Cole’s inaugural Monterey sale was to begin at 6 p.m. that Friday evening in the Monterey convention center.

“At a quarter to six, the joint was empty,” Cole remembered.

But then a tidal wave of people arrived.

Cars were presented, bids were placed and prices were, well, astounding, and included at least a couple of “solds” for record numbers.

The entire gross was about half of a 275 GTB today.”

[/pullquote]“I remember Leon Mandel came to me and said ‘I want to interview you for AutoWeek.’ I said why? He said, ‘What you’re doing is so important. It’s going to change everything. It’s going to have a major impact on prices from now on.’”

But even after such an opening night, Cole said, “The entire gross was about half of a 275 GTB today.”
Here’s just one example about how prices have changed since that first Monterey auction: Cole recently spoke to the owner of that Porsche 904 that sold for $80,000 at the inaugural sale.

“Do you remember?” Cole asked the former owner.

Cole returns to Monterey this year, but with a new sales format. He recently received a phone call from the owner of another Porsche 904 called to inquire about selling his car. All he wanted from Cole was a guarantee the he’d walk away with at least $2 million after the sale.

”I got a letter of credit yesterday from a customer that was four times the amount of my total sale in 1986,” Cole said. “My entire auction, the entire gross sale that year is possibly less than the commission that can be earned on a single car this year.”

Cole sold the rights to his Monterey sale to RM in 1997. After more than 20 years in classic car sales, Cole sought other business ventures. But he kept an eye on what was happening with classic cars, and a couple of years ago helped Barrett-Jackson get back into the high-end of the marketplace with its Salon Collection.

Now, he has relaunched Rick Cole Auctions, which returns to Monterey with an interesting experiment — a classic car auction in which the bidding on some three dozen vehicles will be done not in the traditional bidding parlor format but remotely, by smart phone, with the winning bids to be announced at midnight as the Monterey weekend concludes.

Just as his inaugural 85-car Monterey sale was an experiment, so is his newest endeavor, though Cole said his anxiety has relaxed a little since he read a recent article in The Wall Street Journal that reported that fewer people are attending auctions and more are bidding online.

“What I’m doing is not novel,” Cole said, “but it is novel in our business (classic and collector car sales).”

Among the cars to be offered at Cole’s new Monterey auction is a Volvo P1800 with only 8,600 miles on its odometer.

“I got a call from a guy in Sweden,” Cole said, adding that the caller wants to buy the car so he can drive it in The Great American Race, the annual cross-country rally for vintage vehicles.

“He can’t be there in person, but he can bid online,” Cole said.

One thing Cole is interested in seeing is the thought process that goes into bidding under his new format.
“No one has to make a snap decision on Friday night,” Cole said. “You have until the end of Sunday to do it.”

Cole hopes he’s as happy with his new Monterey sale as he was with his first.

“It was easy to see that we got it right,” he said.

Cole said one thing he did right nearly 30 years ago was to make sure Monterey Historics founder Steve Earle and Pebble Beach chairman Lorin Tryon would accept an auction during their events.

At the time, the concours raised money for the local United Way.

“If you were gong to give to another charity, which would it be?” Cole asked the Pebble Beach concours chairman.

“By year three they had enough money to buy a new building. They’ve become the largest foster care organization in the United States. I’m proud of that,” said Cole, who again is working with the now re-named Kinship Center as his auction’s beneficiary.

So, we asked Cole, we’ve looked back nearly 30 years to the first Monterey auction. What do you see for the future?

Cars are more fun (than art). They’re the only thing of great value that you can actually share and show.“

[/pullquote]”I hope there’s an end in sight on prices,” he said. “But we might laugh at this 10 years from now. We might laugh remembers when Bonhams sold that cobbled together, rebodied 250 GTO for $60 million and now it’s worth $160 million.”

One hundred and sixty million dollars! That’s the sort of prices they get at sales not of automobiles but of collectible art.

“The cars are more fun,” Cole said. “They’re the only thing of great value that you can actually share and show.

“Guys who are settled into their 60s and are enjoying some of the rings they spent so much time to accumulate tell me, ‘I just want to have fun.’”

Rick Cole says the same thing, adding that it’s not just that he wants to have fun, but “I’m having a lot of fun.