Teenage angst: Learning to shift for yourself, and perhaps to gain an appreciation for classic cars 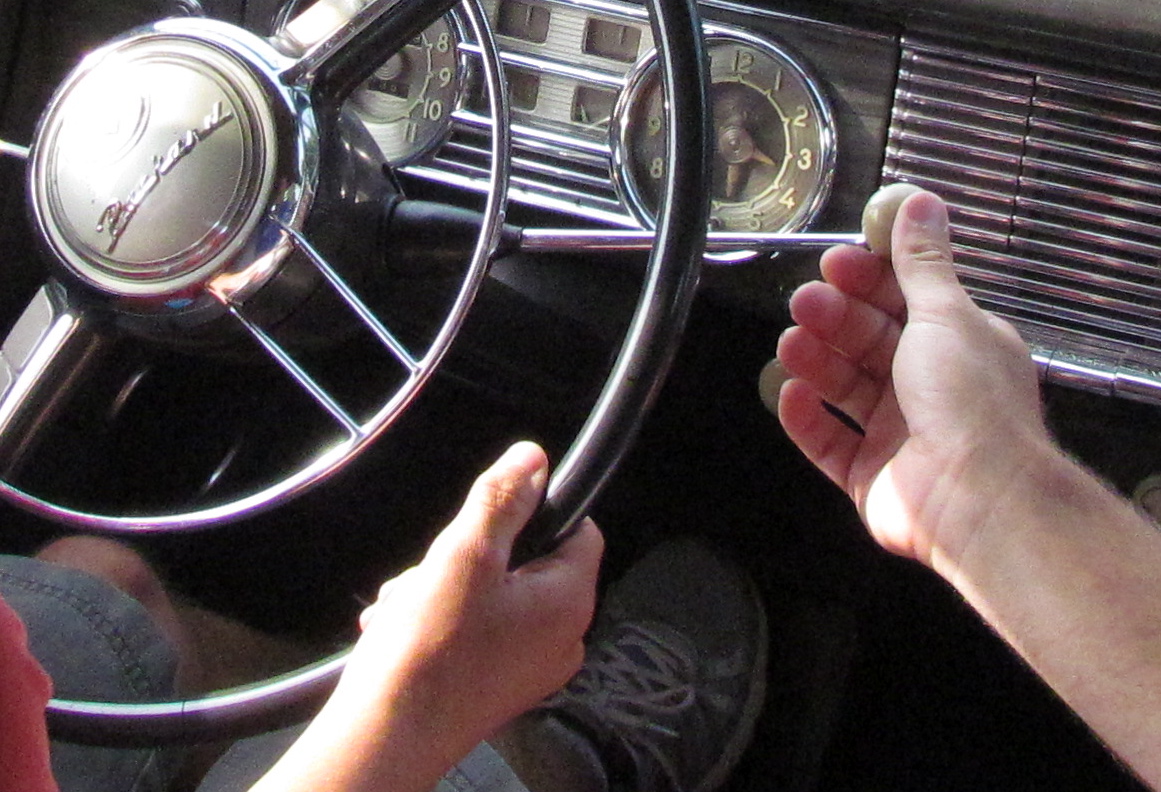 Back when I was learning to drive, and perhaps it was the same for you if you are of a certain age, I had no choice but to learn on a car with a manual transmission.

Both the big, pale yellow wagon and the red-and-white Ford had “three on the tree” transmissions. So if I wanted to drive — and I wanted to oh so very much — I had to learn how to manipulate those gear-shift levers while doing the three-pedal dance down in the driver’s-side foot well.We’d become a two-car family a couple of years before I started driving. With my little brother well into grade school, my Mom went back to work as school nurse. We had a new, nine-passenger Chevrolet station wagon and a ’57 Ford sedan my folks bought from my grandmother when she bought a new car.

Like everyone else who has learned to drive a stick shift — and to push more pedals that you have feet with which to push them — the early days of my learning curve frequently had the cars bucking like broncos, or simply stalling out to a state involving neither motion nor sound.

But with patient parents and personal persistence, like so many others I finally got the hang of it, and even became skilled enough to deal with the treacherous and steeply angled Ninth Street hill, where rolling backward when the stoplight changed could mean much more severe consequences than rolling back into a car behind you (as if that wouldn’t be bad enough); it could mean rolling back onto very active railroad tracks at the base of the hill!

Triggering such memories was the invitation I received recently to serve as an instructor at a Hagerty Driving Experience, a program the classic car insurance company designed to teach young drivers how to drive cars — especially classic cars — equipped with manual transmissions.

Nowadays, maybe 5 percent of new vehicles roll off an assembly line with a manual transmission bolted to the engine. Frankly, in this era of multi-tasking, that’s not necessarily a bad thing: Have you ever tried to text and drink a latte while downshifting from third to second gear?

But if you like driving older cars, the multi-tasking you face as a driver involves shifting for yourself because back when today’s classics were just cars, automatic transmissions were about as rare as a manual gearbox is today.

Teaching young drivers to shift is only part of the Hagerty program’s mission. As the world’s largest insurer of classic vehicles, Hagerty also hopes to interest younger drivers in older cars and in the classic car hobby.

To do this, a few times each year, Hagerty invites its manually shifted classic car-owning customers to share their cars with young drivers from their community. Hagerty launched the program in 2011 in conjunction with the inaugural Classic Car Appreciation Day, a national day of old car festivities sanctioned by proclamation of the U.S. Senate.

The most recent Hagerty Driving Experience was held on the grounds of the Gilmore Car Museum, between Kalamazoo and Battle Creek in southwestern Michigan. In addition to providing its approximately 3/8-mile pavement oval, the museum made three of its cars available — a 1948 Packard, a 1969 Checker Marathon and a 1974 Volkswagen Beetle convertible. A couple of Hagerty customers also brought their cars — Fred Colgren with his 1974 MG Midget and Mark Mihalo with his 1980 Triumph TR8. Hagerty furnished three cars from its own collection — a 1930 Ford Model A, a 1964 Ford Mustang and a 1969 Chevrolet Camaro SS.

Although we’re on an oval track and have a couple of muscular pony cars, the program is about learning to shift gears, getting the car going in first and then perhaps shifting into second before having to stop and repeat the process. Three stop signs punctuate the course to encourage both learning and to restrict speeds.

Students attend either the morning or afternoon session. Every student gets to try every car for at least a couple of laps. For one thing, the students enjoy experiencing a variety of cars — and no one got to hog the Camaro or Mustang. For another, the students learn that each car’s clutch and shifter have their own nuances.

At least that’s the plan. Old cars being old cars, sometimes they leak or get hot and need a breather. But all of the 20 students in the morning session and the more than 30 in the afternoon experienced at least four or more different clutches, and to learn from a variety of instructors as well.

For my part, I tell students not to fret if the car bucks and stalls, because everyone who’s ever learned to drive a manual gearbox goes through the same thing. But I also tell them that they can minimize the bucking if they have really patient feet.

Have your right foot just hover of the gas pedal, I tell them, and then release the clutch pedal oh so slowly. There’s a point at which the car starts to move forward as if by magic. When that happens, you can feed in some gas and release the clutch and you’ll find yourself rolling smoothly down the road.

I also encouraged them to remember how it felt to get it right, and about how you need to listen to the car because just its sounds can let you know if you’re coordinating clutch and gas pedal properly.

With experience comes much quicker starts and before very long you’re leaving rubber on the road.

This was my second Hagerty Driving Experience. I covered the program’s visit to Scottsdale, Arizona a few years ago. Both then and here, I was eager to talk to students and parents to learn why they were here, why they thought learning to drive a stick was important enough that, in some cases, they’d driven a couple hundred miles each way.

Some said they had a classic at home or were helping restore one and they want to be able to drive it.

One mother told me her daughter wasn’t allowed to drive the family’s classics — a couple of 442s and a pair of Mustangs — until she learned how to shift them properly, and that it was “less emotional” when instructions were coming from someone other than a parent.

One girl was particularly eager to get into the TR8 since her family has a TR6 and now she may get to drive it.

One father told me how happy he was that, unlike his older children, his youngest son was interested in classic cars. “I’d been waiting,” said the dad with a ’71 Datsun 240Z and who, with his youngest son, is restoring a ’68 Camaro RS convertible.

I had to ask: “Was that the reason he’s not your boyfriend any more?”

“That was one of the reasons,” she responded.

What made my day was the girl who came up to the Mustang at the end of the day. She’d been in the car earlier with another instructor. Might she, she asked, take one more lap? Her first try had been a bucking nightmare and she wanted to see if she might find a way to conquer the car’s clutch (and perhaps her own fears).

I said sure. She climbed in. I talked her through the process and we rolled smoothly from the staging area onto the oval. At each stop sign she stopped and proceeded again, smoothly. We completed the lap and she was about to turn back into the staging area.

She was all smiles. Once again, she did just fine.

“You made my day,” she said as she walked away with her dad.

Truth be told, she’d just made my day as well.

Day over. Lessons taught. And learned. But I left the event still wondering about one thing: Whether the dad with the 911 Carrera was going to let his son drive it for the first time on their way home that afternoon?

Think skateboarding is crazy? Consider the bicycle with a propeller

This round of BMW art cars done with artificial intelligence