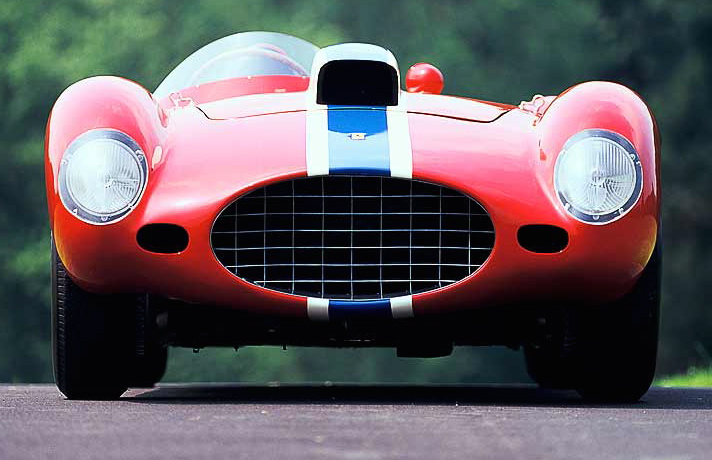 How’s this for provenance? A Ferrari first raced by Carroll Shelby is being offered at auction for the first time in its 59-year history.

The Ferrari is a 410 Sport (0592CM), one of four intended for the never-held 1955 Carrera Panamericana road race (thus the CM for Carrera Messicana in the serial number). The car is the second significant Ferrari announced for  Rick Cole’s sale at Monterey, where some three dozen cars will be on display at the Marriott Hilton but bidding will be done via smart phone between August 14 and 17.

The 410 Sport CM was a spinoff of the 375 Plus that won the 24 Hours of Le Mans in 1954. It carried a 5.0-liter Lampredi V12 and was created, according to Rick Cole Auctions, with an eye for taking on Cadillac- and Oldsmobile-powered cars in North American sports car racing.

“The demands of the Mexican race and the difficulty of providing support over the extreme distance of 2,096 miles (3,373 km) meant that the 410 Sport would need to be both more powerful and better suited to the crude Mexican road system than the earlier 375 Plus,” the auction company said in its news release.

“An all-new Tipo 519C chassis was created for the 410 Sport, based on the elliptical tube frame of the 375 Plus, but lowering the center of gravity, widening the track and moving the engine further back in the chassis. The engine would be the F1-proven, 60-degree long-block Lampredi V12 with bore and stroke increased to 4,962 cc. This resulted in the now revered 380 hp 4.9-liter Tipo 126 V12. Power was delivered to the rear axle through a long-legged 5-speed transaxle.”

A 51-gallon, riveted-aluminum fuel tank was designed to keep the car racing for longer periods.

Of the four 410 Ferraris, wwo chassis were built to the above specifications, but only 0592 was bodied in the two-seat spider configuration of the 410 Sport, Cole Auctions says. The second chassis was a closed Berlinetta delivered for road use.

Because of the huge, deadly crash at Le Mans in 1955 and the increasing casualties that were taking place in the Mexican road race, the 1955 Carrera Panamerica was canceled and the 410 Sport was sold to American Ferrari racer Antonio “Tony” Parravano.

“The 410 Sport was simply the biggest, baddest hammer Ferrari had ever constructed, a monumental automobile that presaged such front-engined twisters as the Scarabs which would dominate unlimited sports car competition until the dawn of the mid-engined Can-Am age,” the Cole news release quotes automotive expert Rick Carey.

“The 410 Sport prevailed in the most competitive races in the world in 1956 and 1957, the U.S. West Coast SCCA events, and introduced drivers who would become world champions in sports cars and Formula One to the essence of power, handling, balance and performance.

“Even decades after driving it, each of the racing legends who experienced the 410 Sport remember it vividly, a measure of the impression which its power and handling made upon them. To a man they describe the 410 Sport as a benign, predictable and tractable race car.

“In Carroll Shelby’s words, “It was The Brute of the brutes,” but if, as Shelby noted, the 410 Sport was “… a car that didn’t have any bad vices,” its good vices must have been its power and traction.”

Parravano, a real estate developer who made his money building post-war tract housing in southern California, put Shelby in the Ferrari for its debut event, the Palm Springs road races. Shelby and Ferrari won, but the car did not race again until 1957, when Eric Hauser and Bart Spiegelman drove it in two events in New Smyrna, Florida.

“At this point, the early history of s/n 0592 became even more interesting,” the Cole Auctions news release notes. “Tony Parravano’s problems were mounting with the dreaded Internal Revenue Service. So Parravano fled California for Mexico in 1957, taking a number of automobiles with him, including his 410 Sport.”

Eventually, Parravano’s family settled accounts with the IRS and his cars were sold. A Juan Buchanan raced the 0592 in the 550-mile “Costa a Costa” race across Mexico in November 1954.

Ferrari collector Robert Dusek of Pennsylvania acquired the car and returned it to the U.S. in June 1971. The car was sold in 2008 to a collector in Europe but reportedly has not been driven since that sale, though it recently underwent a complete inspection at the Ferrari factory.