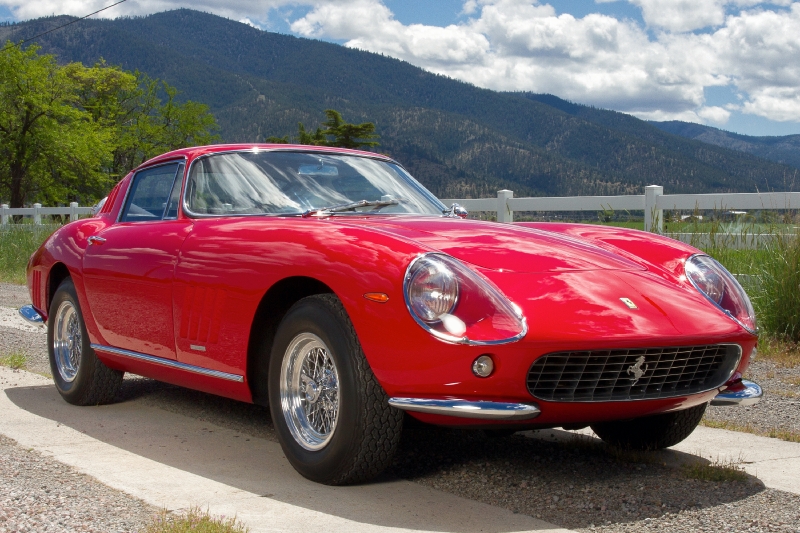 For the first time in its nearly 50 years of existence, the 1965 Ferrari 275 GTB Competitizione Clienti built as a special order for American Ferrari patron Alfred Ducato will be offered for auction at the Rick Cole Auction this summer at Monterey, California.

The car is one of 10 special 275 GTBs built to homologate the 275 GTB as the successor to the 250 GTO for the FIA Grand Touring racing championship and is believed to be the most complete and original one surviving.

The car (s/n 7477) has been part of a private collection for 25 years and has not been shown outside that collection.

The car will be one of some three dozen at the auction, which will follow an unusual format. Cars can be viewed at the Marriott Hotel in downtown Monterey, but bidding will be done not in the typical auction-block arena format but by smart phone or Internet. An announcement of winning bids and vehicle sales is to be made at midnight, Pacific Standard Time, on Sunday, August 17.

Ducato was an early and close associate of Enzo Ferrari and reportedly hosted him at Ducato’s home in Hillsboro, California. Starting in 1951, Ducato owned several 12-cylinder Ferraris, most ordered through Luigi Chinetti, including a 195 Inter Vignale coupe, a 212 Inter Vignale coupe that had been Ferrari’s Geneva auto show car, and a 375 MM Pinin Farina coupe.

Last year, a story in Classic and Sports Car magazine included a comment about “a glorious group of such renowned [Ferrari] customers as Gianni Agnelli, Alfred Ducato and King Leopold.”

One story notes that Ducato took delivery of the 212 Inter Vignale a couple of days before the 1953 Pebble Beach Concours d’Elegance. The car had sustained some damage in shipping and Ducato and friends worked through the night making repairs so he could drive the car to the concours, where he and his wife, Marie, represented the marque.

Ducato and Ferrari remained friends throughout their lives. Ducato died in 1987, a year before Ferrari.

Introduced in Paris late in 1964, the 275 GTB coupe and 275 GTS spider were designed to succeed the 250 GT series and were the first production Ferraris with independent rear suspension and a transaxle that had the gearbox as a unit within the rear axle, thus enhancing the car’s weight distribution.

Ferrari built four lightweight 275 GTB “specials” for the 1965 international racing season, but they were not accepted for the GT category by the FIA because they were not close enough to the production sports car. Ferrari then built a set of 10 alloy-bodied competition cars that were much close to the production version, though with three additional cooling slows in the rear quarter panels and racing-style fuel filler.

As a longtime customer who already had taken delivery of a 275 GTB, Ducato was offered one of the 10 Competizione Clienti cars. While most of those cars were used for racing, Ducato’s was not.

“What it did represent for its new owner was the ultimate 275 GTB one could own for the road,” said the news release from Rick Cole Auctions. “As a result, this car may now be the only complete and original 1965 Ferrari 275 GTB Competizione Clienti in the world.”

Ducato took delivery at Maranello and drove the car in Europe before having it shipped home. The car remains original except for being repainted in the early 1990s.

The car is being offered with two sets of wheels — alloy Ferrari wheels and polished Borrani wire wheels. The original alloy spare wheel and tire, mounted vertically in the trunk, are included.

Ducato owned the car for 22 years. After his death, Terry Price (now a partner in Rick Cole Auctions), arranged for the car to be sold to Ferrari dealer Ed Wettach, who showd it at the 1987 Chicago Historics and the 1989 Ferrari Club of America national concours at Watkins Glen.

Price also handled the car’s subsequent sale in the early 1990s to a private collection.
Since leaving Ducato’s garage, the car has been driven only 332 miles and recently has undergone 400 hours of maintenance on all of its systems.