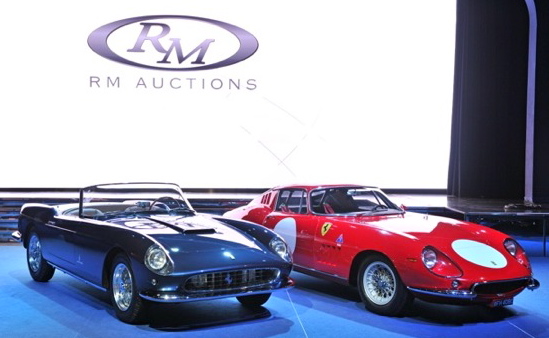 Anyone who has ever attended an RM auction with Max Girado at the podium knows the significance of what you are about to read:

“It’s not often I’m lost for words,” said Girado, who is both RM auctioneer, and thus the face and voice of RM, and the managing director of the company’s European auction arm.

“But,” Girado continued, finally rediscovering his words, “I am simply stunned by what we have achieved tonight in Monaco.”

And what did RM achieve with its third auction in the Principality of Monaco?

“This has been our biggest-ever European sale,” Girado said, “and the 93-percent sell-through figure is testament to the diversity and depth of quality that we had on offer. The atmosphere and energy was incredible right through to the final lot, and it’s a particular delight that we have attracted so many enthusiastic new bidders from all around the world.”

In the span of just five hours, RM sold cars, a couple of boats and motorcycles, and a batch of memorabilia for more than $56.7 million.

And the total might have been significantly more had a couple of 7-figure bids not fallen short of the owner’s reserve (the minimum amount needed for an object at auction to sell).

RM stages its Monaco auction every other year in conjunction with the Grand Prix de Monaco Historique vintage racing weekend. In alternate years, RM stages a sale at the Concorso d’Eleganza Villa d’Este on the shores of Italy’s Lake Como.

The four high-dollar sales of the 2014 Monaco auction were Ferraris, led by a 1966 275 GTB/C that sold for nearly $7.86 million (price includes buyer’s premium). With coachwork by Scaglietti, the car was the 9th of 12 produced and is now is the most valuable hard-roofed Ferrari ever sold at auction.

Its sale came just a few lots after what had been the high point of the auction, the nearly $6.5 million spent on a 1959 250 GT Pininfarina Series I cabriolet.

The Brabham F1 racer was the car Denny Hulme drove to victory in the 1967 Monaco Grand Prix.

Another vehicle with a strong local connection was the 1958 Riva Tritone boat formerly owned by Prince Rainier III and his wife, the former Grace Kelly. The historic boat sold for more than $554,823.