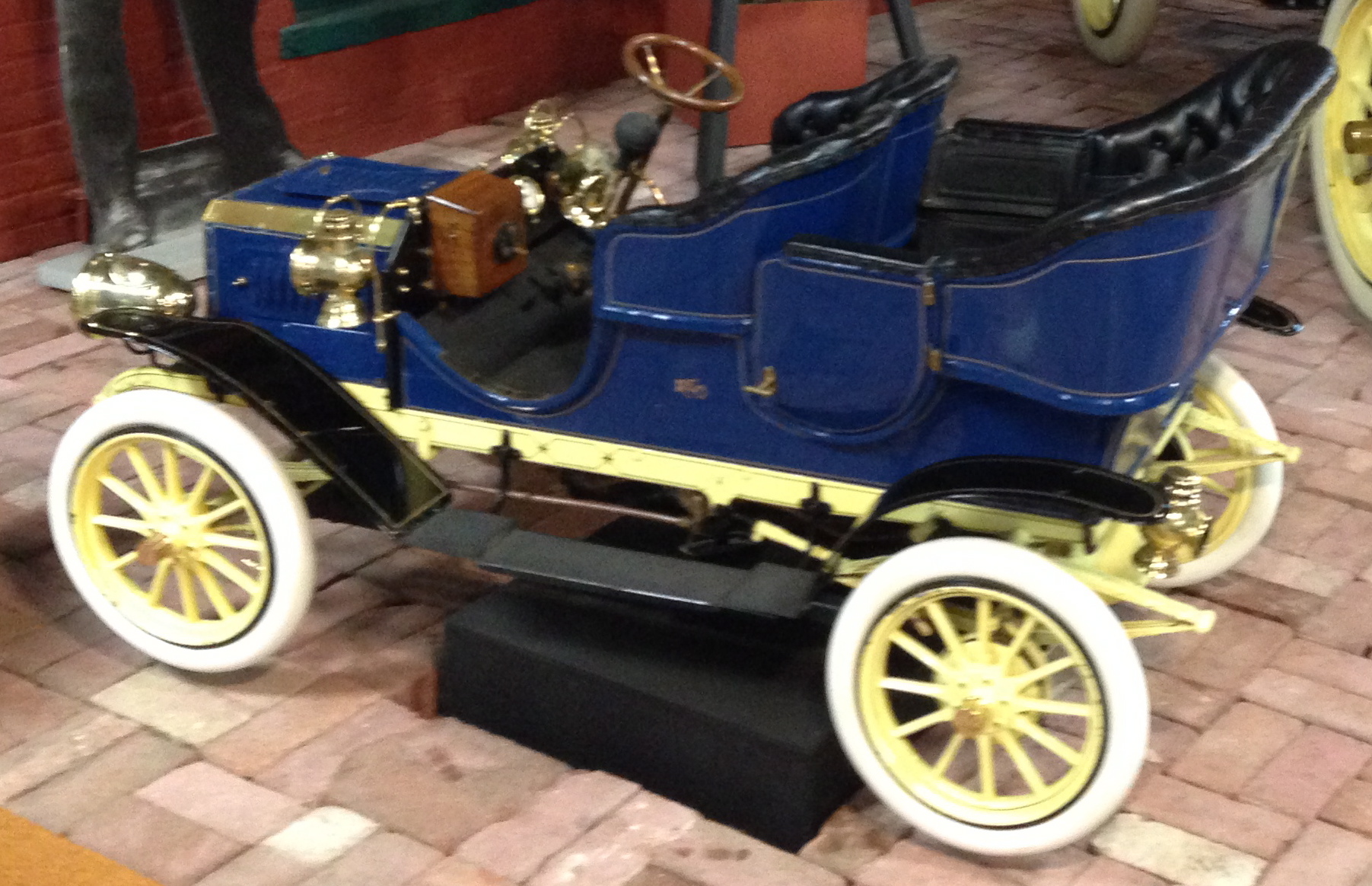 For those who think there is no altruism left in the world, I’d like to tell you the story of a Mama, a Baby and the couple who brought them home for good after they wandered the country apart for more than 100 years.

The Mama and the Baby are REO automobiles from 1906 that have been returned home to spend the rest of their days on display in their city of origin at the R. E. Olds Transportation Museum in Lansing, Michigan.Two of the principals in this fascinating story are human – Peter and Debbie Stephens of Dublin, Ohio.

Debbie (Anderson) Stephens is the great granddaughter of Ransom Eli Olds, engineer, businessman, and founder of the Oldsmobile and REO car companies.

It was R. E. Olds, not Henry Ford, who adapted an assembly line for automobile production and who was the creator of a multitude of other mechanical innovations. When he was forced out of the Detroit-based Olds Motor Works in late 1903 by his company’s money men (after he’d created one of the most innovative cars of its time called the “Curved Dash” Olds), R. E. moved his operation about 70 miles west to Lansing and established the REO Motor Car Company. This new company built a variety of automobiles through 1936 and trucks from the mid-teens into the 1970s.

The R. E. Olds Transportation Museum, acknowledged as one the best small museums in the country by Collectible Automobile magazine, is the repository of rich automotive, truck and motor history of Olds and his products. The museum occupies an old city bus garage on the banks of the Grand River in downtown Lansing, where a wonderful variety of vehicles, artifacts and archives document Olds’ life and his influence on the world.

The Baby we’re talking about here is a perfectly accurate ½-scale model of the REO Model A 5-passenger Light Touring Car introduced to the public at the New York auto show in 1906. The Baby REO, hand built in 1905, is powered by a structurally accurate but scaled-down, horizontally opposed two-cylinder engine making 2 horsepower (as compared to the full-size car’s 16 horsepower) and mated to a planetary transmission — smaller, of course, but detailed just like the big car’s unit. The brass details, chassis, radiator shell and everything else is accurate and exactly to scale. The Baby REO cost $3,000 to build – just about twice the cost of the car it was made to promote.

The Baby REO was a hit right from the start. After the New Your Auto Show, the REO Motor Company used it for promotions around the country for as long as the Model A was produced. All the Olds grandkids and some of the great grandkids, including Debbie’s dad, Olds Anderson, were photographed in the Baby REO.

Having spent its usefulness in its first life, the Baby ran off to join the circus in 1911, when it was leased to the Ringling Bros. and Barnum & Bailey folks, who used it until 1936. Among other uses, the car served as transportation for “Tiny Tim,” who succeeded the famous Tom Thumb, and a group of “Lilliputians.”

RELATED:  As museums re-open, the Crawford shares its history

Circus people made only one modification. In deference to their highly flammable tents, they rigged the engine to run on compressed air instead of gasoline. An early alternative fuel vehicle, we could call it.

But from 1936 until the early 1950s, no one seemed to know what had happened to the Baby. However, in preparation for REO’s 50th anniversary, the company’s public realties staff, which had  a sense of history, launched a  concerted search. In response to a newspaper story about the search, Carl Hell, a REO truck dealer in Altoona, Pennsylvania, revealed that he had the car, tucked away in a corner of his warehouse.

The Baby was cleaned up and returned to Lansing for the anniversary celebration.

It was about this time that this story’s heroine, Debbie Stephens, first encountered the Baby and its legend. As great granddaughters to the iconic Mr. Olds, Debbie had her picture taken in the car with her older sister Diane standing along side. The photography, she recalls, was done in the basement garage of the Olds Hotel (where her dad, R. E. Olds Anderson had his office) in downtown Lansing. This was in 1954.

While she doesn’t remember the details of the day, being only 3 years old at the time, the picture became part of the family story. Family members related it to the time when Olds Anderson had his picture taken with his siblings in the car in 1919.

The next chapter of this story begins in about 1979 with a visit to REO headquarters by Richard “Dick” Teague, then vice president of design for American Motors. Since its liberation from storage, the Baby had gone on display at the REO truck headquarters in Lansing. AMC was contemplating the purchase of REO and Teague was part of the evaluation team.

The Baby REO called out to him from its display in the lobby. Teague was a dedicated car collector and became immediately intrigued with the Baby REO and it possibilities. His idea was not only to restore the Baby but to hook it up with a perfect, matching 1906 REO Model A Light Touring Car as well — a Mama REO, if you will.

And that’s what he did. But first he had to track the Baby down again. While his plan developed, the car was moved to the Mississippi offices of one of REO’s financial backers, who had taken possession of the Baby. But Teague wanted the little car and would not take no for an answer. He ended up paying $3,000 (just about the original cost to build the Baby), plus a nice dinner out for the seller.

RELATED:  Ian Poulter’s car collection is as impressive as his golf trophy case

The project, matching a Mama to the Baby and meticulously restoring both, became a labor of love that took Teague more than a few years. Finally, Teague had them in his collection until his death in the 1980s.

Afterward, however, Mama and Baby were back on the lam again, going from one collector to another until the Stephens family re-entered the picture.

Peter Stephens (retired CFO of Wendy’s) and his wife, Debbie, knew of this matched pair of REOs and had wanted to acquire them  and bring them back to Lansing for the Oldsmobile centennial in 2004. But each time the cars came up for sale, the Stephens found out too late; new owners already had taken possesion.

In early August, 2008, the Stephens learned through the REO national club and R.E. Olds Museum director Deborah Horstik that Mama and Baby were to be sold at the Gooding & Company auction at Pebble Beach later that month. This was good news and bad news: They would have the opportunity to buy them, but Pebble Beach bidders tended to have deep pockets and big egos, making for sometimes outrageous prices. Early estimates indicated the price could be into seven figures.

The Stephens had just about decided to pass the auction and follow up later with the buyer.

But just a few days before the auction, a Gooding representative called to ask if the Stephens might like to bid on the cars remotely. Having never participated in such a process, they were a bit intimidated, but the Gooding folks were helpful and accommodating. So late on a Sunday night in the middle of August, Peter and Debbie found themselves on the phone, nervously listening to the auction. They had set a modest budget, and understood that they might lose the cars this time as well.

Fortunately, fate and karma were on their side.

Not wanting to stir the pot, Peter held off making an initial bid. But as the bids began to plateau, he jumped in and made his.

The Stephens were a surprised at how quickly things happened from there. Payment needed to be arranged immediately and the cars needed to be transported within a few days. After getting an outrageous transport bid from a hauler who wanted to charge full price for two cars, an enthusiastic driver from FedEx, after remarking that these were his favorite cars at the auction, agreed to carry them both for the price of one.

Immediately after the purchase, Peter and Debbie called Deborah Horstik at the museum to ask a little favor. “Could we get a little assistance with long-term storage?” Horstik whooped with joy. This would be a real boon to the museum.

A few days later they all arrived – both cars and the entire Stephens family, plus a few other Olds relatives — at the R. E. Olds Transportation Museum in Lansing for an emotional homecoming. The Stephens’ two sons, Gregg and Matt, age 21 and 25, respectively, only then realized that the Baby REO was the car featured in the picture they had seen on the wall at home all those years. They, too, now have a full appreciation for that glimpse into their family history. Gregg is studying journalism with a focus on film-making at Scripps University. Perhaps he’ll do a documentary on this story one day.

While the Stephens knew for many years they wanted to buy the cars, they never had any intention of savoring them as part of their own modest collection — a 1903 Curved Dash Olds, a 1905 REO Touring Car, a 1930 Olds Convertible and a 1960 Mercedes 190SL.

Rather, it was always their intent to lend them out long-term to the museum, so that they could be shared with the public in their home town. Not only was that a way to share these historic REOs with the public, but with the extended R. E. Olds family as well, many of whom also have memories of, and an affection for, the Baby REO.

Peter and Debbie started getting kudos from everywhere. An emotional call from the president of the California REO club, thanking  them profusely for snatching the pair and sending them to the museum. Well-known brothers, serious classic car collectors from mid Michigan who are getting on in age were reportedly brought nearly to tears with the same sentiment. Many collectors and REO aficionados were afraid they would end up in Europe never to be seen here again.

Later, when talking to Dick Teague’s widow to gather some more details on the car, Debbie reports that Mrs. Teague said, “Dick would be doing summersaults in his grave” knowing that the Mama and Baby REOs were saved for the public and in the museum.

Those are just some of the rewards of altruism.

A baby shower was hosted by the RE Olds Transportation Museum to celebrate the arrival of this remarkable baby, a diaper carefully placed underneath to catch any drips. A special display for the Mama and Baby REOs now dominates a corner of the museum.

The museum has always been a fascinating place to spend some time, but now it’s even better.