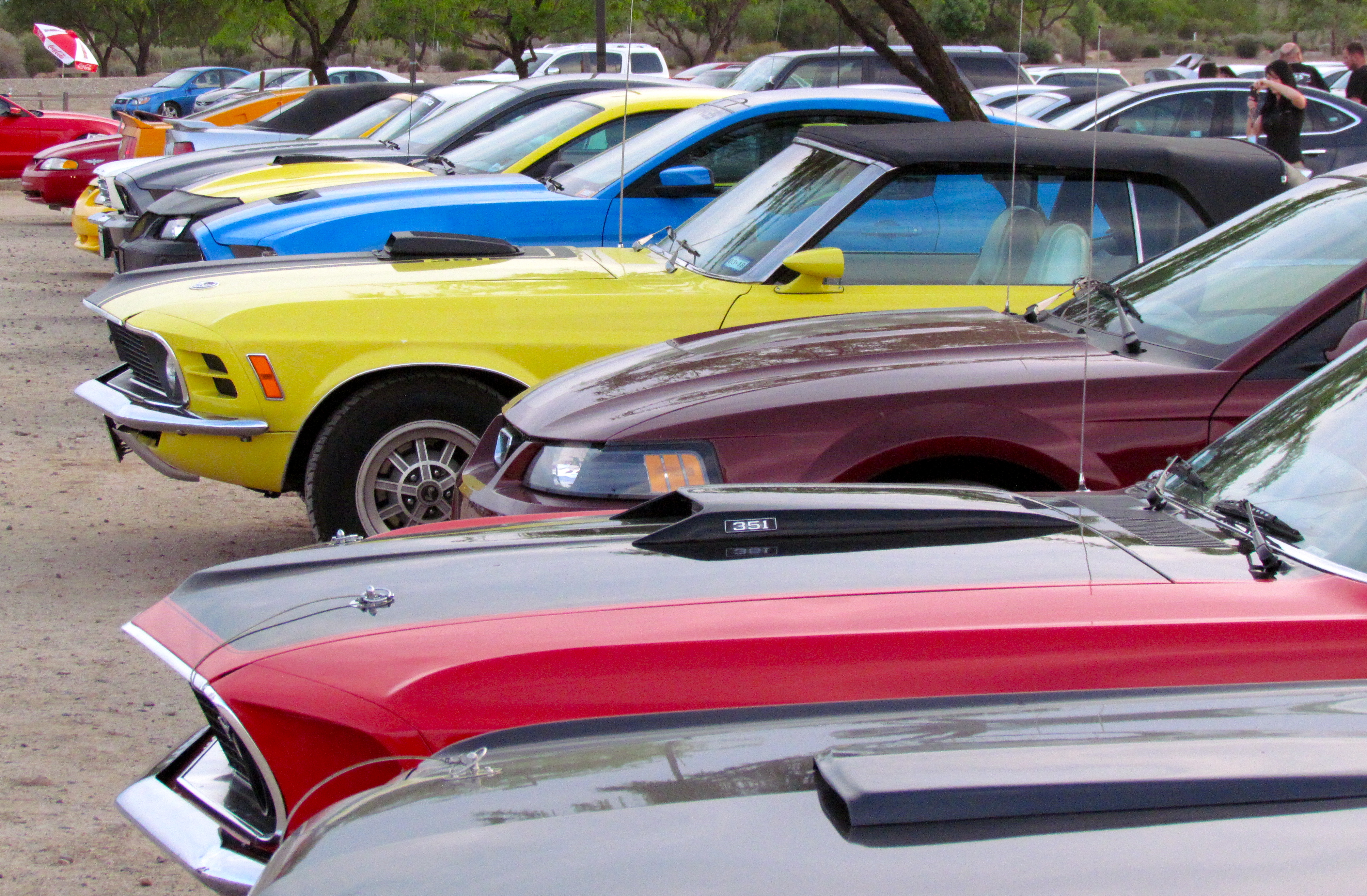 Actually, however, it was about a month earlier that the public got its first and very unofficial look at the stunning new Mustang.

That happened when Henry Ford II’s 20-year-old nephew, Walter Buhl Ford III, borrowed one of the super-secret pre-production pony car prototypes and drove it to lunch in downtown Detroit. Guess what: The car was spotted by a reporter for the Detroit Free Press. The next day, the newspaper published its scoop and the public got its first glimpse of Ford’s revolutionary sporty car.

And the Mustang was revolutionary. It didn’t look like the other cars on American roads, and especially not like the Ford Falcon, with which it shared much of its mechanical underpinnings. Like the Falcon, the Mustang was compact, but with its long hood and short rear deck it looked more like a European sports car than anything that might have been designed in or produced by a Detroit automaker.

To say the car was a sensation is gross understatement. Not only was it on the cover of the automotive buff books, but of Time and Newsweek, albeit sharing both of those covers with Iacocca’s mug. And the car sold like hotcakes!

Pity “hot” wasn’t a term to describe its performance, although that word did describe the reaction of the engineering team responsible for the hottest of all Ford cars and for the concept car that first bore the Mustang nameplate.

That hottest of all Fords was the GT40, the car that ended Ferrari’s winning streak in the 24 Hours of Le Mans race. The engineering team saw its mission as two pronged: the GT40 for the track and the slightly tamer Mustang, named after the American fighter aircraft, for the road.

In the fall of 1962, they had debuted their Mustang concept, a rear-engine (Ford of Germany’s compact V4 was the powerplant) two-seat roadster, with racer Dan Gurney driving exhibition laps just before the start of the U.S. Grand Prix race at the Watkins Glen (N.Y.).

If the 90-horsepower V4 sounds less than exciting, consider that the original 1964 1/2 production Mustang came with a 101-hp inline 6. Consider also that the Mustang unveiled by Iacocca at the World’s Fair news conference had a vinyl roof.

Sure, you could get the car as a much sexier convertible, or even with its hardtop roof painted, not upholstered, and you could opt for a 164-hp 260cid V8 or even a 271-hp 289 power plant. But, basically, the Mustang was a pony, not a race horse.

Lee Iacocca called me and said, ‘You have to help me make a sports car out of the Mustang’.”

[/pullquote]It may have been the pace car for the 1964 Indianapolis 500, but it wasn’t going to win the Kentucky Derby, let alone the Woodward Avenue stoplight drag race or anything else.

At least not until Henry the Deuce called Carroll Shelby and, as Ol’ Shel’ recounted the story to me, “Lee Iacocca called me and said, ‘You have to help me make a sports car out of the Mustang.’

“I really didn’t want to do it,” Shelby continued. “We were busy racing and building Cobras. But he talked me into it.”

So Shelby and his crew tweaked the engine, changed the suspension, enlarged the brakes and removed unnecessary weight, things such as the back seat. The result was the GT350, a succession of victories in sports car racing and, once General Motors and Chrysler and AMC did their own “pony cars,” we had the Trans-Am series and some of the best racing anyone’s ever seen.

Of course, we also had the Mustang II of the 1970s, which really wasn’t a Mustang but a gas-sipping economy car with the galloping horse badge — lipstick on a pig, I think they call it. Fortunately, we’ve also had more Shelby Mustangs and Roush Mustangs and even Saleen Mustangs.

I was at AutoWeek magazine when Steve Saleen, whom I first knew as an Indycar racer and team owner, started modifying Mustangs. One day he called and invited me out to his shop to test drive an early prototype. The car was, well, let’s say it was sort of cobbled together and as I drove down a Detroit-area expressway with Steve riding shotgun, I wondered how to respond politely when he asked me what I thought.

I don’t recall what I said, but what I thought was that I hoped the doors wouldn’t fall off right then and there, and how quickly could I drive this thing back to his shop?

Now I must add that Steve’s shop has come a long way since then. I’ve been back in Saleen Mustangs and they’re wonderful to drive, fast and safe.

I thought about that early Saleen recently when I spent part of an evening photographing the Mustangs Across America tour that was heading from California to Charlotte for one of the two big birthday parties this weekend.

Among the 550 or so Mustangs in that herd were one-owner 64 1/2s, one of those original vinyl-roofed versions, coupes and convertibles and fastbacks, Saleens and Shelbys and Roushs and their owners, owners from around the world.

I was a Mustang owner once. As sort of a graduation-from-college present to myself, I bought a brand-new 1969 Mustang — fastback, Indian Fire paint, 302cid V8, automatic, high-back bucket seats. I don’t know what tires it wore, but I remember replacing them with Goodyear’s newest Polyglas GT rubber. The tires were terrific, well, at least in the dry. Trying to maneuver on icy roads in Michigan was another story.

Those grippy tires and something Mario Andretti once told me may have saved not only my life but those of my bride and a co-worker and his wife one evening when we were going out for pizza and a guy ran a stop sign and hit us just behind the driver’s side door. We spun but kept the rubber-side down, the policeman said, probably because I was wearing a seat belt and kept control of the steering wheel.

I’d only recently started wearing my seat belt (it was optional back then). But one day I was at Michigan International Speedway watching Indy car practice when Andretti smacked the wall. As I recall, there was a small fire after the crash so the car was literally and figuratively “toast.”

I rode out to the scene with the track’s general manager and was talking with Andretti and asked him how he could walk away with nothing more than a scratch on his nose. He pointed to the safety belts in the race car. I buckled up on my way home that day.

(You can share your 50th birthday wishes for the Mustang in the comments section below. Or, if you still have that special Mustang, tell us about it via the “Share yours” box in the upper right-hand corner of the page.)