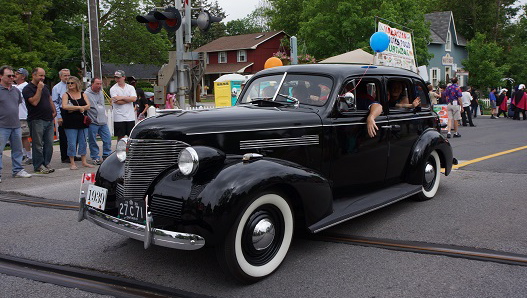 Editor’s note: The Warriors’ Day Parade is held each August at the Canadian National Exhibition in Toronto. The parade this year will be the 93rd and is scheduled for Saturday, August 16. It will commemorate especially the 100th anniversary of The Great War and the 70th anniversary of D-Day.

Each Warriors` Day Parade you can find my 1939 Chevrolet Master Deluxe somewhere in the middle, chauffeuring very senior folks who fought in World War 2.

While these events are a time of reflection, we are seeing fewer veterans every year. The challenge each of us is faced with is what will these events really mean to folks if we allow them to forget?

Like Remembrance Day, celebrated on November 11 and originally created to mark Armistice Day, the end of World War I, Warriors’ Day is an opportunity for folks to recognize the ultimate sacrifice made by veterans in both World Wars, Korea and various missions over the years.

However, not one veteran remains from World War I and World War II ranks are thinning dramatically. An entire generation that made such a huge sacrifice is slowly disappearing.

Veterans of the Second World War who stormed Normandy, France in the D-Day invasion may recall a passage off a war memorial which highlights their deeds. “They will never know the beauty of this place, see the season’s change, enjoy nature’s chorus. All we enjoy we owe to them. Men and women who lie buried in the earth of foreign lands and in the seven seas.“

Remembering and honoring our veterans should not require a special occasion. Their exploits are well documented and deserve recognition.

A new generation of armed forces is serving overseas in Afghanistan and other conflict areas and deserve recognition. Our troops in Afghanistan are not buried at the side of the road or some field, they’re bringing them home and that’s a credit to our country.

For those who perish, their final drive home can create a respectful memorial service when folks line bridges along the highway. With flags waving in the breeze, with firefighters and paramedics saluting as folks stand at quiet attention while the procession of police motorcycles and cruisers… and a hearse passes by. One can feel proud to be part of the crowd who line these routes.

While our present involvement in world conflict has been reduced for now, the next time one of our heroes returns home in a procession, take a few moments and go out to any procession route bridge. It’s not just that one returning soldier you’re honoring, but the millions who contributed, either fighting on distant shores or building airplanes and munitions at home who have served our country in time of need.

So, while you stand at attention and clap when you see a veteran waving from a classic automobile during any Remembrance or Warriors’ Day Parade, think for a second of the sacrifices the prior generation have made, for all of us!

A Tale of Two Fords on AutoHunter