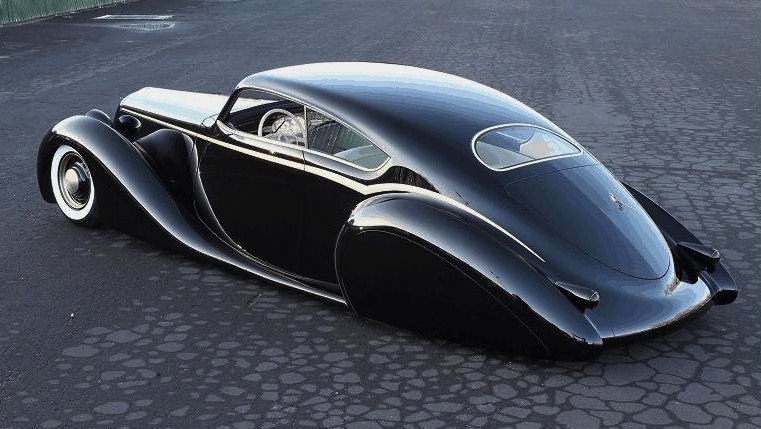 An evocative coach-built creation with a heavy-metal rock ’n’ roll connection has won Goodguys’ Custom of the Year, awarded this past weekend at the Goodguys Rod and Custom Association’s 32nd annual All American Get-Together in Pleasanton, Calif.

Named Black Pearl, the winning car is the result of collaboration between rock star James Hetfield, longtime front man for Metallica and a noted custom-car collector, and Rick Dore, one of California’s most well-known custom-car builders.

Black Pearl was completely scratch built, not starting out with any particular car but designed from the ground up in the style of art deco European masterpieces of coachwork from the 1930s. The flowing teardrop shape recalls the famous works of French coachbuilders Figoni et Falaschi and Franay while staying true to the custom-car tradition of Southern California.

Sculpted from sheets of aluminum by Marcel and Luc De Lay, two of the world’s top metal craftsmen, the coupe was based on a hand-drawn design supplied by Hetfield and Dore. The curvaceous form was completed in just six months.

“As an artist myself, I see the passion, dedication and perfectionism it takes to be good at your craft. I am humbled by their gift of metal sculpting,” Hetfield said in a Goodguys news release. “The fact that they started with an 8×10 drawing and ended up with a complete car is a testament to the ability of the human mind and hands.”

Black Pearl, painted deep PPG black by Darryl Hollenbeck of Vintage Color Studio, is mounted on a custom-made chassis that uses the outer rails of a 1948 Jaguar and is powered by a 302cid Ford V8 with 375 horsepower. The interior was crafted by Ron Mangus and the unique rims are from Wheelsmith Fabrications.

In addition to the Goodguys 2014 Mother’s Custom of the Year, Black Pearl has won the Sam Barris award as well as the Custom d’Elegance at the Sacramento AutoRama.

Black Pearl is not the first award-winning car resulting from the partnership of Hetfield and Dore. In 2012, a custom 1937 Lincoln Zephyr V12 named Voodoo Priest that Dore built for Hetfield won the Most Beautiful Custom at the Sacramento AutoRama.