Worst fears proving true as another Corvette emerges from sinkhole 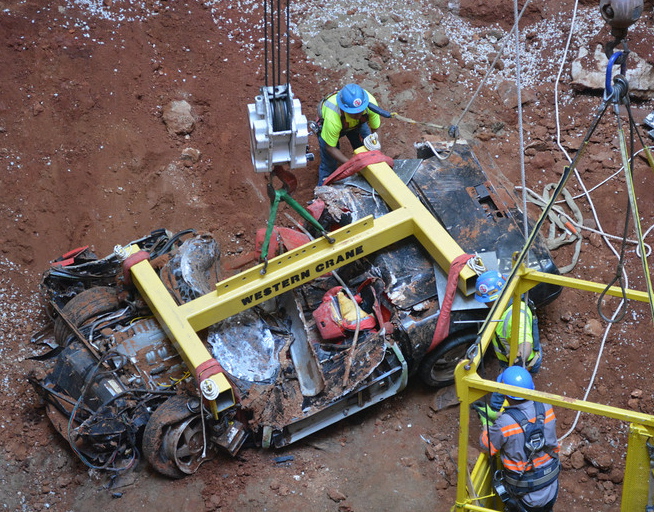 “We have always feared that as we dig further into the hole, that the cars would continue to be in worse shape. Unfortunately those predictions were accurate.”

At around 9 a.m. (Central time) Monday, the ZR-1 Spyder emerged from the sinkhole beneath the Skydome of the National Corvette Museum and, the museum said, “is in worse shape than even the PPG Pace Car.”

And the worst, the museum staff fears, is yet to come.

[polldaddy poll=”7933454″]
“The 1.5 Millionth (car) has both a large boulder and a concrete slab laying on it,” Frassinelli said. “We anticipate that when that car is pulled out, possibly on Wednesday, that it’s going to be in even worse shape than the Spyder.”

It was early in the morning of February 12 that the sinkhole opened beneath the museum’s Skydome and eight cars from the collection fell into the abyss. On March 4, the first of those cars — the 2009 “Blue Devil” ZR1 — was recovered and was in remarkably good condition.

The first round of extraction resulted in the recovery of five cars, with damage increasing as the cars were found deeper into the hole and under more debris. After the fifth car — the badly damaged pace car — was removed, the construction and extraction team needed to secure not only the earth and debris in the hole but the tall spire that rises from the Skydome floor and extends through its roof.

It wasn’t until late last week that work began to remove dirt from the hole so the search could begin for the three remaining cars. At that point, only the left-rear quarter of the ZR-1 Spyder was visible. A heavy-duty vacuum and excavating equipment was used to reveal more of the car. In that process, the team also discovered the 1.5 Millionth Corvette.

“When we started digging around the Black Spyder, we found a piece of white fiberglass underneath it and we continued to expose that until we saw that it was the 1.5 Millionth car,” said Mike Murphy, chief executive of Scott, Murphy and Daniel Construction. “We had no idea where it was, we just happened upon it.

“We hope when we move the white car we find the red car (a 2001 Mallett Hammer Z06) that way, because we’ve just not had any luck detecting where it is (even though his team has used metal detectors and probing rods in that search).”

Monday, the team worked to continue removing dirt from around the Spyder, and in the early evening decided to carefully pull the car away from the dirt the remained around it.

“It was free everywhere except underneath there was a concrete slab wedged,” Murphy said. ‘“We felt we had it in the best position, just like pulling a gun out of a holster. Everyone felt like it was best to take it so it wouldn’t bend and break if we’d had it exposed more.”

The team resumed its recovery efforts early Tuesday, removing a large boulder that lodged in the Spyder’s cabin and also collecting pieces of the car to help with any restoration or preservation efforts. The Spyder then was freed from the hole.

The ZR-1 Spyder is an engineering prototype; no ZR-1 convertibles were produced. But the car is a full-performance vehicle that debuted at the 1991 North American International Auto Show painted Sebring Silver with a Neutrino Yellow interior. After the show, the car was repainted black and the interior was redone in red.

“They didn’t build a convertible ZR-1 to sell to the public,” said Mike Williams, a member of the museum facility team whose father helped build the prototype car on the assembly line at the Bowling Green Corvette plant. Vette Magazine reported that the car was the first concept car ever assembled on a regular production assembly line.

The underside of the hood was signed by everyone involved in the build of the car.

“They have not been able to retrieve the hood,” Williams said. “We are still hoping they find it, but that’s one of the big problems. When we displayed the car we wanted everybody to be able to see the signatures so when the car went in (the hole) the hood was up and it just snapped the hood off.”

After removing the ZR-1 Spyder, the extraction team began work to remove the boulder and concrete slab from the 1.5 Millionth car, which it hopes to retrieve from the sinkhole on Wednesday or Thursday.

The ZR-1 Spyder was moved to the display area of the museum where the other extracted cars are being shown to museum visitors. Plans call for those cars to be shipped to Michigan this summer for restoration by General Motors.

The museum provides a live camera feed of the work in the sinkhole.