History of the Ford Windsor 351 Engine 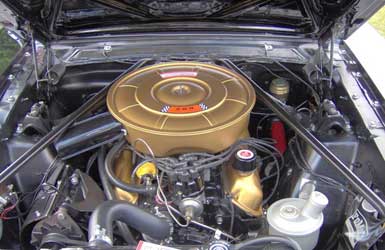 The Windsor, Ontario-built 90° V8 was introduced in 1962 as a 221 cubic inch engine. It was Ford’s first modern lightweight small-block replacing the old Y-block. Through the years, not all small-block Windsors were produced solely at the Ontario plant, but the name stuck with the engine.

In 1962-63 the gross horsepower rating of the 221 engine was only 145 HP. With the introduction of the 289 in 1963, horsepower jumped to 195 HP with a 2-barrel carburetor and 225 HP with the 4-barrel. The 289 engine pushed horsepower ratings to 271 HP in 1965 which required the addition of many heavy-duty factory parts, including different cylinder heads, bigger valves and smaller combustion chambers. This high performance version of the 289 is informally known as a 289 “HiPo” or K-Code engine, which was available for the following Ford years and makes:  Ford Fairlane starting in 1963 and the Ford Mustang starting in 1964.

Carol Shelby used the 289 K-Code engine as the base for his GT 350. The Shelbys were rated at 306 HP by using a larger carburetor, high-rise intake and less restrictive exhaust. In 1966, High-Performance Models of the Mustang were also fitted with 289 HP engines as an option.

The 351 Windsor officially debuted in 1969 and 4 barrel versions of the 302 were subsequently dropped. By 1971 emissions regulations began robbing horsepower from the once mighty small block. With reduced compression ratios and the addition of mechanical smog devices, the 302 managed to only pony-up 140 HP in 1975. In the mid to late 70’s, small block performance stagnated among factory built 302’s.

As mentioned earlier, 1969 introduced the 351W engine rated at 250 HP with a 2 barrel and 290 HP with the 4 barrel. The 351W has a taller deck height to increase the stroke. While all 289, 302 and 351 Windsor’s share a 4″ bore, the 351W engine has many changes that set it apart from other Windsor engines. The intake, heads, pushrods, block height, and firing order are just a few of the more notable differences between the 351W and other 4″ bore Windsor engines.

Another variant of the small block Windsor is the Boss 302. These engines where built as Ford’s entrance into Trans-Am road racing. SCCA racing rules required that at least 1,000 production vehicles were to be fitted with the Boss 302 in order to qualify for the event. Boss 302’s used a standard 302 Windsor engine block, but are fitted with cylinder heads from the 351 Cleveland. This and other improvements set it apart from the standard 302.

Even though the Windsor engines no longer adorn today’s Ford production vehicles, the aftermarket offers enthusiasts a long list of specialty parts made especially for the 5.0-liter engines.