A boy, his dad, and an historic red racing car 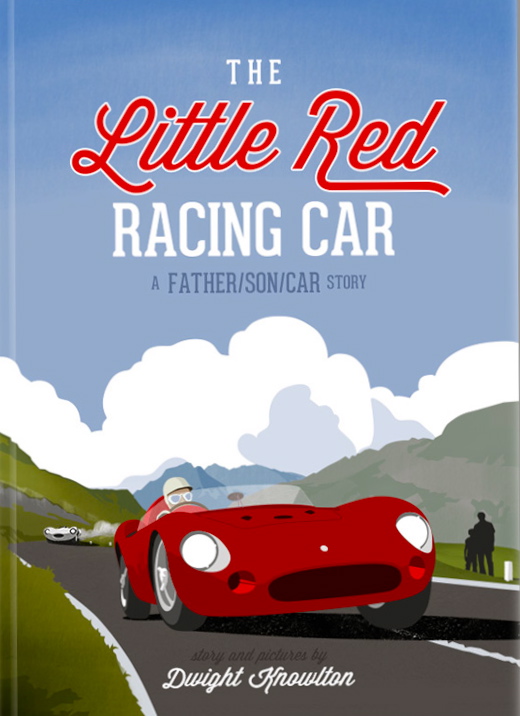 A family moves into a farm house and while Mom and Dad start to unpack, the Boy and his Dog head out to explore and to play. The boy bounces his ball off the boards of the old barn, at least until the ball finds its way through a hole instead of bouncing back.

The boy wants his ball, and he finds an eye-level knothole.

We never learn whether he sees his ball. But we do learn that he sees something else.

The title of this children’s book — The Little Red Racing Car — tells you what he saw, and the rest of the book tells you the car’s story, from its success on the race track to its rediscovery, restoration and return to pavement.

The book’s subtitle is A Father/Son/Car Story, and it really doesn’t matter if you’re a Dad, a Son, a Mom, A Daughter or a Grandparent, author/illustrator Dwight Knowlton’s words and pictures will appeal to anyone, but especially to those of us passionate about classic cars and the historic days of racing.

In fact, Knowlton’s book is just as good as its back story, and that’s fascinating.

Knowlton remembers sitting on his own father’s lap and listening as him reading The Red Car, a thin, 50-cent paperback about a youngster who found a wrecked sports car and, with the guidance of an old mechanic, he learned about cars – and life.

The Red Car not only created a bond between Knowlton and his father, but it triggered Knowlton’s passion for cars, especially old cars that need tender loving care.

At age 14, Knowlton was poking around his grandfather’s barn in Michigan and, “under several blankets, and a blanket of dust,” he found an aging Chevy pickup truck, which Knowlton thought was a thing of beauty despite its rusted-out rocker panels and other blemishes.

Knowlton took money he made from baling hay and “made my grandfather a cash offer.” Just like the youngster in The Red Car, Knowlton stumbled across an old mechanic who “pointed me at the right tools” and helped guide the truck’s resurrection.

Before long, Knowlton was off to college to pursue a career in art. He studied sculpture and painting, but the school’s art department also required a class in computer graphics. Knowlton’s artistic interest and career path shifted gears. He became a designer, creating packaging and signs and entire retail environments until “I was forced out of a company I helped found.”

So he moved to Phoenix, met his wife and they had a son, Parker. Knowlton became involved in a series of startups doing strategic branding and design.

I want to do all the colors.”

Two years ago, Knowlton went searching to find a book to read to Parker. He wanted a book with a story like the one his father had read to him. Instead, the only children’s car books he could find were about cartoon cars, not real ones.

Knowlton decided to write one himself. He not only did that, but he started his own publishing company. With The Little Red Racing Car between hardbound covers, Knowlton has begun work on The Small Silver Speedster, and he already is thinking about the rest of the series.

He has started taking reference photos of a Jaguar and a Bugatti.

We’ll do a book review on each of those as well. Turns out, however, that the first silver car won’t be that small speedster. Instead, Knowlton and Sir Stirling Moss (as the British driver has been known since his knighthood) will co-author a book on Moss’s historic victory with navigator Denis Jenkinson in a silver Mercedes-Benz 300 SLR in the 1955 Mille Miglia race.That book, The Greatest Race, should be published this fall.