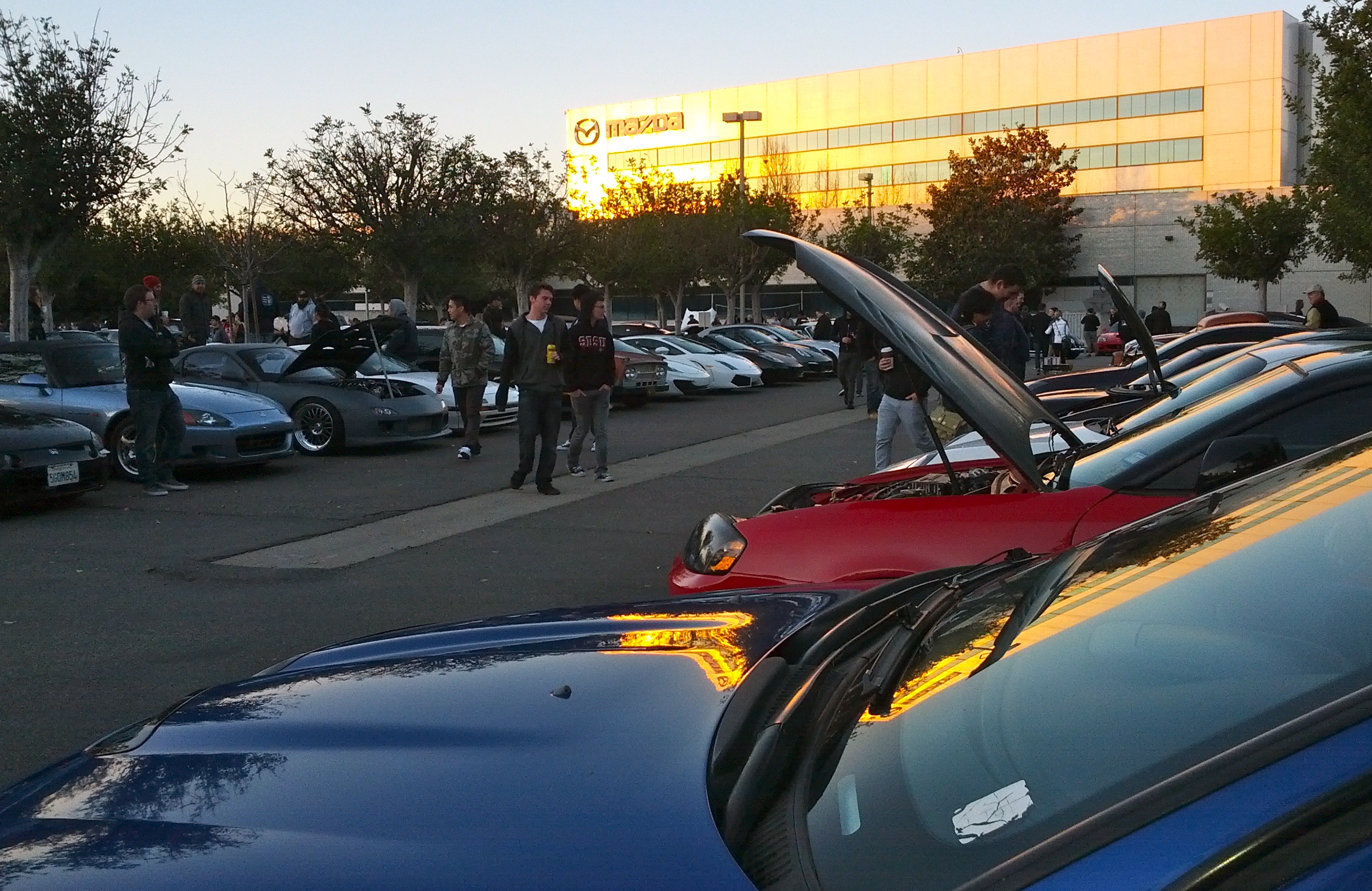 Cars and Coffee in Irvine is likely the worst-kept car secret in Southern California.

“We prefer to keep it low-profile and not stir up lots of media attention,” is how John Clinard, semi-retired Ford Motor Company media rep, explained things to me. Ford “hosts” the event early Saturday mornings at the parking lot sandwiched between the Ford and Mazda headquarters. To make things easy on your GPS, it’s at 7905 Gateway Boulevard.

Considering that manufacturers often “secretly” show up with world-premiered concept cars, and about 300 other SoCal exotics and collectibles arrive each Saturday at the crack of dawn, plus several hundred enthusiasts, I think it’s safe to say that the cat is out of the bag.

I don’t mind getting up so damn early.”

There are lots of Cars and Coffee gatherings around the country, but the Irvine gathering is the froth at the top of the event espresso. For example, last weekend Nissan dropped by with the IDx Freeflow and IDx Nismo concepts, cars which had made their world debut at the North American International (Detroit) Auto Show just a few weeks earlier. On a quick tour of Southern California, which included a stop at Motor Trend headquarters, it became clear that carmakers consider this Irvine cars and coffee crowd something of a focus group. As they well should — many of them have offices and design centers just minutes from this weekly gathering.

Among the big stars such as the Nissan concepts and a few million-dollar Ferrari’s, there is a large assortment of interesting cars that speaks directly to the spirit of the Southern California car culture — American muscle cars alongside vintage Porsches, alongside lowriders, next to European collectibles, beach cruisers, motorcycles, and everything in between.

Since I live in SoCal, this is my “local” Cars and Coffee and I’m always impressed how different the cars and people are from week to week. On this particular Saturday, I was most impressed with the owner of the custom hot-rod who brought his Girl Scout daughter along. She set up a stand selling Girl Scout cookies — which, I might add, sold out by the end of the morning.

As car folks go, this crowd is in the top 1 percent of the hobby.

“For me, Cars and Coffee is an oasis for enthusiasts, and you never know what’s going to turn up. It’s also one of the last gatherings where you can watch kids and adults alike fall in love with cars,” said Ezekiel Wheeler, himself a top automotive editor and photographer, adding, “which reminds me of why I don’t mind getting up so damn early.”

More information about Cars and Coffee Irvine can be found at  http://irvine.carsandcoffee.info/

(Editor’s note: Do you have a weekly or monthly gathering of the car clan in your area? Please use the Share Your Story tab to let us know about it so we can share your show with everyone.)

Vince Bodifordhttp://www.theweekenddrive.com/
Vince Bodiford is a veteran automotive journalist, founder and editor of The Weekend Drive. He's a member of The Motor Press Guild and a contributor to many automotive media outlets including television, print and digital media. He won the Overall Championship of the 1994 Cannonball Run One Lap of America with Price Cobb for the Porsche factory team, has been a co-owner of racing teams, and is also a newspaper publisher. Based in Southern California, Vince regularly attends motor shows around the world and road tests the newest cars and trucks from every major manufacturer.