Update: First Corvette emerges from sinkhole, starts and is driven away 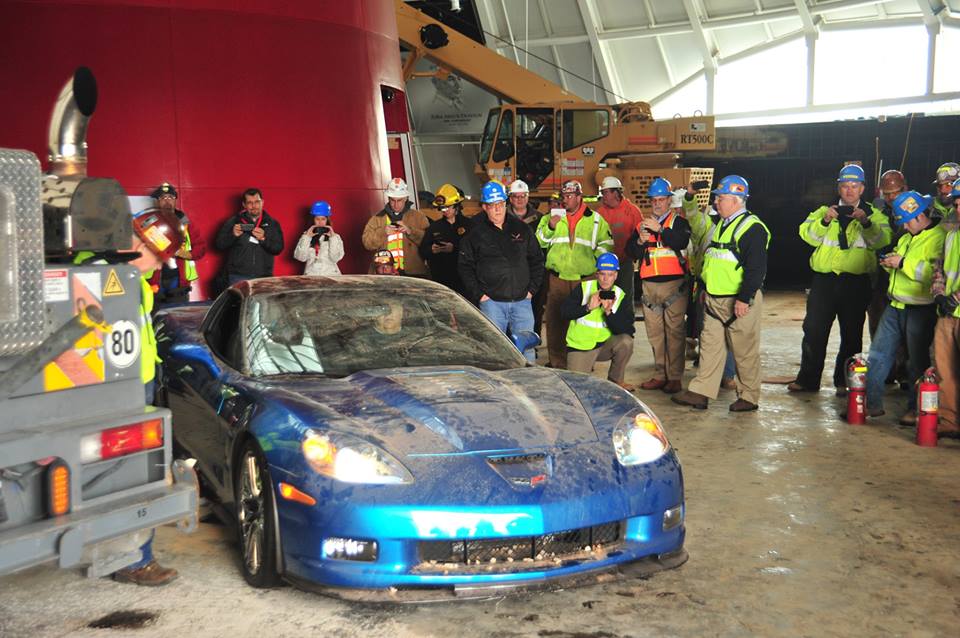 Editor’s note: Here’s the latest from the National Corvette Museum, where eight cars were swallowed recently by a sinkhole:

Construction personnel, media, museum visitors and staff cheered as the first of eight damaged Corvettes, the 2009 “Blue Devil” ZR1, emerged from the depths of the sinkhole this morning. Not only was the car recovered, but it started after only a few tries and drove some 20 feet to the doorway of the Skydome.

[/pullquote]”That’s a GM product for you. They take a licking and keep on ticking,” said Mike Murphy, construction manager for the extraction project.

Crews have been working six days a week since the sinkhole swallowed eight Corvettes in the National Corvette Museum’s Skydome exhibit area. This past Saturday, the crews rigged up the ZR1 and did a few test lifts.

“I was worried about the wheels,” said Murphy. “This morning we took so long because we wanted to add some secondary straps in case the wheels pulled. It was just a little more insurance.”

Murphy added that with this project, nothing is set in stone on how to do it.

“It’s been a huge relief. It went better than expected,” he said.

After the elation of the first car being rescued and even running, museum staff were excited to put the car back on display in the  Exhibit Hall.

“It’s incredible to have the car back on display again. It’s what we’ve been hoping for,” said Bob Hellmann, museum facilities and displays manager. “Now we just want to get the next seven, restore the cars, and get them all back on display.”

The museum plans to display the cars as they are recovered, through August 3, when the cars will be shipped to General Motors for restoration.

After taking a lunch break, the crew was to resume the car retrieval process. Next up: The 1993 “Ruby Red” 40th Anniversary Corvette. The 1962 black Corvette is to be retrieved Tuesday, but will be much trickier as a five-ton slab of concrete is partially resting on the front of the car. Two cranes will be used to simultaneously lift the car and the concrete.

It will take a few more days of preliminary work before the extraction of the damaged Corvettes can begin, the museum and its contractors report, and once those cars come out of the hole, they will be put on display at the museum for several weeks before being shipped to Michigan, where Chevrolet will undertake the restoration of the damaged Corvettes.

The new plan is to show the damaged cars at the museum through August 3.

Current plans anticipate removal of the first three vehicles to begin Monday, March 3. The first car to be removed is the 2009 ZR1 known as the “Blue Devil.”

However, “there may be some complications” with the removal of the black 1962 Corvette, the contractor reports, “because the 5-ton concrete slab resting against the front of the car must be lifted simultaneously and in conjunction with the lifting of the vehicle.”

While awaiting additional updates, you can check in anytime to see what’s happening via the museum’s webcam:

Following are our earlier updates and our original report on the sinkhole:

Editor’s note: We top our earlier coverage with this latest update from the National Corvette Museum, where eight cars were swallowed recently by a sinkhole:

It likely will be another week before extraction of the damaged Corvettes begins. However, when the extraction begins, you can watch the progress via the museum’s live webcam and webcast. In fact, you can tune in anytime to see what’s happening as repairs continue beneath the dome. Here’s the link:

Meanwhile, for those who visit the museum, a viewing window has been installed so visitors can see inside the dome during the repair operations.

We’ll post another update just before the extraction begins, or earlier if there are new developments.

Editor’s note: The following is our earlier update from the National Corvette Museum and Chevrolet:

At a news conference today (Thursday), Mike Murphy, chief executive of Scott, Murphy & Daniel Construction, explained that while sinkholes are “very common” in the Bowling Green, Ky., area, “What’s not common is for one to swallow 8 Corvettes.”

Murphy said the damage to the foundation and structure is repairable and will begin by securing the sinkhole and surrounding areas “so that even if we have future sinkhole nearby it will not affect the Museum.”

We are confident that it will be done in time for the Museum’s 20th Anniversary celebration in August.”

It will take two to three weeks to stabilize and secure the area before the process of vehicle recovery can begin. That process, he said, will begin Friday and should take four to six days. After the vehicles are removed, earth will be replaced and then a new floor will be installed.

“We are confident that it will be done in time for the Museum’s 20th Anniversary celebration in August,” said Wendell Strode, executive director of the National Corvette Museum.

It also was announced that Chevrolet and General Motors Design will oversee restoration of the Corvettes damaged by the sinkhole.

“The vehicles at the National Corvette Museum are some of the most significant in automotive history,” said Mark Reuss, executive vice president of General Motors Global Product Development. “There can only be one 1-millionth Corvette ever built. We want to ensure as many of the damaged cars are restored as possible so fans from around the world can enjoy them when the Museum reopens.”

The restoration will be overseen by Ed Welburn, vice president of GM Global Design.

When the cars are recovered, they will be shipped to the Mechanical Assembly facility, a small specialty shop within GM Design, where the best restoration approach will be determined. Mechanical Assembly has been part of GM Design since the 1930s, and maintains and restores many of the vehicles in the GM Heritage Collection and GM’s historic concept cars.

Editor’s note: Here begins our original story on the sinkhole, followed up an update on Wednesday afternoon:

This just in from the National Corvette Museum in Bowling Green, Ky.:

“We received a call at 5:44 a.m. from our security company alerting us of our motion detectors going off in our Skydome area of the Museum. Upon arrival it was discovered that a sinkhole had collapsed within the Museum. No one was in or around the Museum at the time.  The Bowling Green Fire Department arrived on the scene and secured the area.

“It is with heavy hearts that we report that eight Corvettes were affected by this incident.  Those cars include:

“The other six vehicles were owned by the National Corvette Museum including:

“None of the cars affected were on loan from individuals. We have contacted a structural engineer who is arriving today to assess the existing damage and stability of the surrounding areas.  While the Skydome area is closed, the remainder of the Museum is still open. 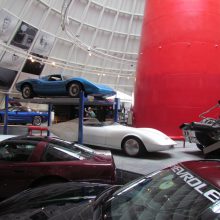 “This year we celebrate our 20th Anniversary and look forward to re-opening the Skydome exhibit area very soon.”

The museum is located across the street from the Bowling Green Assembly Plant where all Corvettes are produced. The area sits over Kentucky’s network of limestone caves and is near Mammoth Cave National Park.

According to a report in the Park City (Ky.) Daily News, the hole is about 20 feet deep.

The National Corvette Museum will be open beginning Thursday, February 13 for tours. The Skydome portion of the tour will be closed to the public. The Museum is open daily, 8am-5pm CT and is located at I-65 exit 28.

The structural engineering firm did determine that the perimeter of the Skydome is stable. We have worked with our insurance adjustor to retain Scott, Murphy and Daniel as our construction manager and they will be coordinating all work moving forward.

All cars that were on display in the Museum’s Skydome not affected by the sinkhole have been safely removed.

As an update, photos of the sinkhole, cars that were affected (before the collapse), and readerboard information on each car can be viewed and downloaded here.

Video footage, including surveillance footage of the sinkhole collapse, helicopter drone footage inside the sinkhole and more are on our You Tube channel here.

Those wishing to make financial contributions to the Museum may do so on our website here.