A Grand National showcase of beauty for all to behold 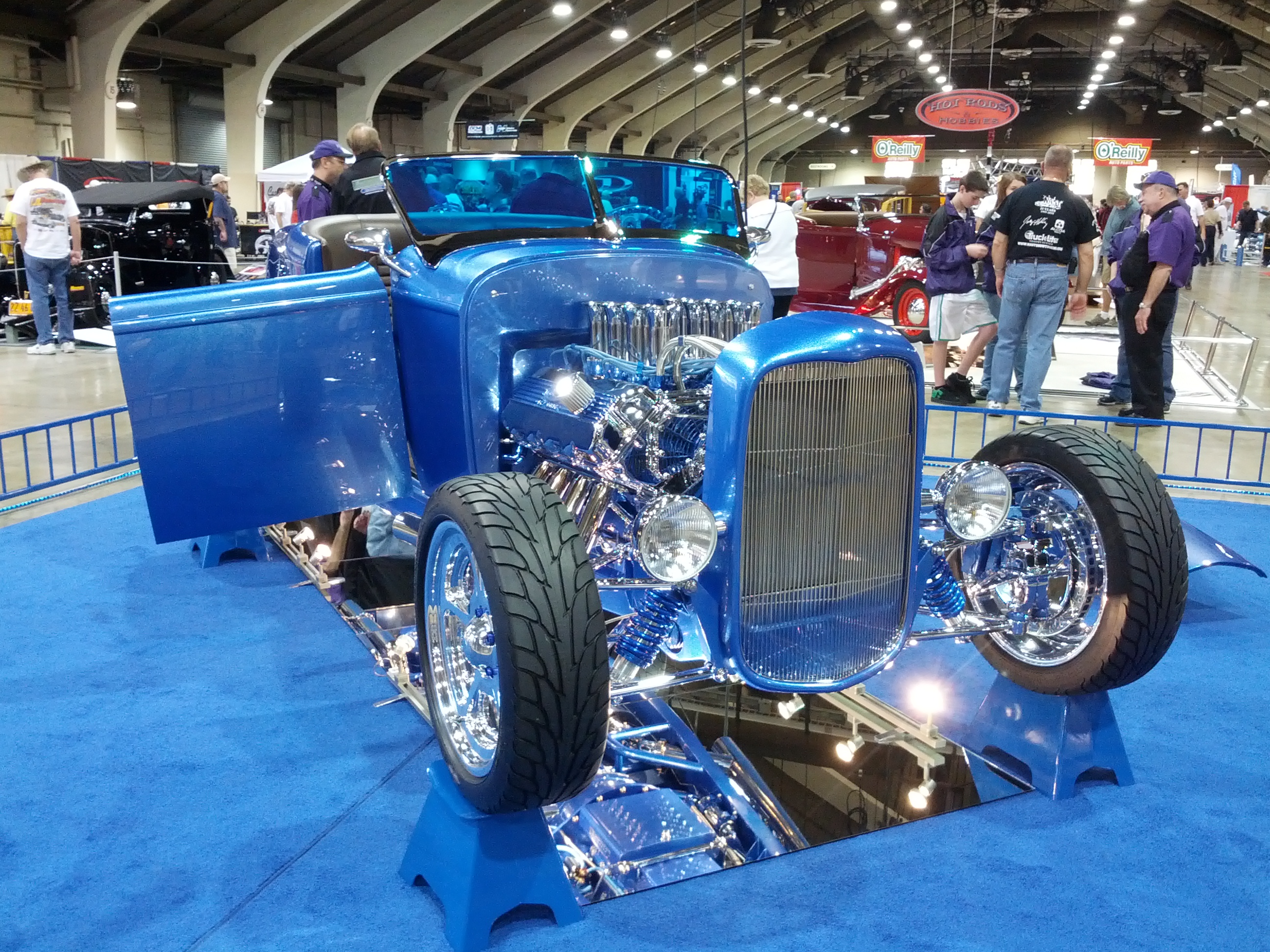 Barry Meguiar would move barely six feet before being stopped by the next mob of fans and gear heads. “What’s your favorite car, Barry?” “Which one is The Most Beautiful Roadster?” “Did you see the Rat Rods?” “Is this going to be on TV?”

We met up with Barry and his wife Karen in Building 8 as they were earnestly trying to just get from one hall to the next. Throngs of fans delayed that progress, and we managed to visit for a few minutes and talk about the show — this grand daddy of them all — the Grand National Roadster Show. Arranged in a series of 1930s-era WPA-built buildings at the Pomona Fairplex, this show is a patchwork of the American hot-rod culture, right in the back yard of its Southern California birthplace.

The Grand National Roadster Show (GNRS) has a way of placing legends such as Barry Meguiar on equal footing with the guys who turn wrenches, spray color, and stitch interiors of the greatest custom cars the world will see… for this year, at least. During our visit, we found that legends of the car world were stacked up like cordwood — car builders George Barris, Gary Wales, Bonneville streamliner builder Steven Fuller (son of IHRA Hall of Famer Kent Fuller) — roamed the halls.

It was here in 1996 that one of those amazing creations in metal and fabric elevated its builder — Boyd Coddington — to superstar status.

But the show is less of a Who’s Who of the Roadster, Custom and Hot Rod world, and more about placing the real stars at center stage — the cars themselves.

GNRS mixes up the most beautiful with the most loved, placing the half-million-dollar-plus creations indoors while outside it lines up the prized single-car possession of regular car guys from all over California. Together, they offer something for everyone as the show attracts one of the largest car enthusiast crowds anywhere.

And it is here that the very best of custom cars make their debut, adding their measure of horsepower to the car culture.

The GNRS is in its 65th year. Once known as the Oakland Roadster Show, it is the longest running indoor car show in the world. It’s been held at the Fairplex in Pomona for the 10th consecutive year — and Southern Californians have adopted this show as the nerve center of the local car culture.

Featuring most types of cars you can imagine, ranging from custom Hot Rods, Lowriders, race cars, motorcycles and Rat Rods.

Back in the day, we never had cars like that.

As for car shows,  this one is huge, with thousands of cars, hundreds of vendors, and even more attendees. While much of the nation battles blizzards and freezing temperatures, the Pomona show boasts nearly 80-degree sunshine days.

“It’s a pretty good idea to finish your car before you bring it to a car show…” he said, referencing the unfinished, trashy, rusted-out look of the fading fad of Rat Rods.

“I’ll be glad to see them go. Back in the day, we never had cars like that. Rat Rods are a new thing,” he said.

You might be well advised to get a Tetanus shot before driving a Rat Rod, which goes hand-in-hand with the resurgent Rockabilly grunge culture that many hope is making only a brief appearance in the hobby.

However, the same would have been said a decade ago about Lowriders, but they have gained respectability and desirability among collectors outside of the traditional Lowrider community, with many appearing in important private collections.

The big attraction at GNRS is what is among the most prestigious car awards in North America; think best-in-show at Pebble Beach, except for hot rods. This year the America’s Most Beautiful Roadster Award (see photo) goes to the Chip Foose-designed, Troy Trepanier Rad Rides by Troy-build uber-rare 1935 Chevy Phaeton owned by Wes Rydell’s Rydell Toy Shop in Grand Forks, N.D.

Awards such as this are really a product and choice of the judges on the ground, as everyone had his or her own favorites. Indeed, 92 official awards were presented in a variety of classes and categories for the cars and the motorcycles.

At Los Angeles International Airport two days after the show, Pee Wee Wentz was preparing to board his return flight to Virginia with his hot-rod builder son Jay, and grandson Tyler. In an elegant, southern drawl, he said, “I think I’ll come back out next year. For Hot Rods in January, there’s no better place.”

And knowing the creations nearing completion at his speed shop, he might just bring something out for the next show.

Vince Bodifordhttp://www.theweekenddrive.com/
Vince Bodiford is a veteran automotive journalist, founder and editor of The Weekend Drive. He's a member of The Motor Press Guild and a contributor to many automotive media outlets including television, print and digital media. He won the Overall Championship of the 1994 Cannonball Run One Lap of America with Price Cobb for the Porsche factory team, has been a co-owner of racing teams, and is also a newspaper publisher. Based in Southern California, Vince regularly attends motor shows around the world and road tests the newest cars and trucks from every major manufacturer.