Experts offer advice about buying classics at auction, and about enjoying them once you get them home

As Arizona’s famous classic-car auction week gets into full swing, the experts caution that too much of a good thing can lead to a nasty hangover. That’s when the red-mist of the auction action fades and you confront the reality of what’s now sitting in your garage.

Do plenty of research before you buy a classic car at auction — and make sure it is something that you will love and enjoy — was the advice from a panel of classic-car veterans who spoke at the Phoenix Automotive Press Association’s fifth annual Arizona Auction Week Preview.

The members of the panel – Keith Martin, the well-known publisher of Sports Car Market and American Car Collector magazines; Corky Coker, the owner of Coker Tire, which specializes in providing rubber for vintage cars; and John Carlson, famed concours d’elegance judge and most recently chief judge at the inaugural Arizona Concours d’Elegance – spoke before a crowd of old-car enthusiasts at the Phoenix Art Museum. The panelists were peppered with questions about where the classic-car hobby stands today and where it’s heading in the future.

Each of the panelists is a lifelong car collector in his own right. Each is in Arizona this week to enjoy the spate of six classic-car auctions happening in the Scottsdale/Phoenix area: Barrett-Jackson, RM, Gooding, Bonhams, Russo & Steele and Silver.  Last year, more than $300 million worth of vintage iron crossed the block and into new ownership, a number that is expected to be eclipsed by this year’s sales totals. 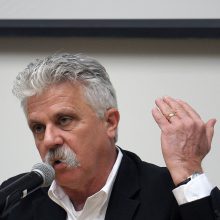 “It’s turned into a little bit more than a hobby now,” Coker (right) told the group. “It’s an industry.”

But all that auction excitement and beautiful cars becoming the target of desire can get out of control if you don’t approach it with a clear head.

Martin related how a screaming auction deal on a 1964 Chevy Nova wagon turned into a wildly expensive restoration that wound up costing him something in the neighborhood of $45,000.  It’s now an incredible car, he added, but maybe not worth what he has in it.  He’ll find out when it crosses the block this week at Barrett-Jackson, where the car is selling with no reserve.

But that’s part of the risk and the fun of engaging in the hobby, he said, adding that he has gained much enjoyment from his cars over the years, particularly the Italian ones from Alfa Romeo:  “When you buy a car, it changes your life.”

Choosing the right classic car involves much more than its looks or performance, Carlson said.  What matters most is how you will enjoy it, and with whom. 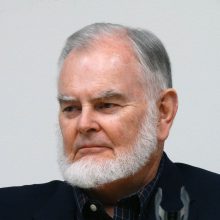 “I tell folks, ‘What group do you want to associate with?’ ” he said.  “The key for me is that you have fun with your car.”

Despite his longtime participation in concours competitions and judging, Carlson (right) said that for most people winning an award at a show should never be the chief goal of owning a classic car.

“The only person who cares that you won a trophy is you,” he said.  “I tell people that if you really want a trophy, buy one and save yourself $100,000 and a lot of headaches.”

The question of preservation vs. restoration gained traction during the discussion, with all three panel members espousing a cautious approach in attempting to bring a car back to original or even better condition while possibly ruining its originality and authenticity.

Coker is about to debut a new reality television show, Backroad Gold, on the Travel Channel. The show will focus on discovering original barn-find cars. Coker said he is a major proponent of preserving original cars despite their flaws. 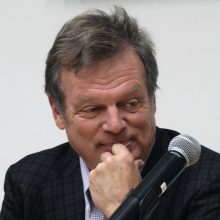 Of course, that only works if the car is in reasonably good condition, Martin (left) noted.  “There’s a difference between a preserved car and a nasty old thing.”

Carlson said that under concours definitions, a preserved car is one that has never been cosmetically restored, with no new paint, upholstery or chrome work.  They can be mechanically repaired as needed to make them run, as well as getting such perishable items as tires and windshield wipers replaced. But the patina of faded paint and interiors can add much to the allure of an automotive survivor.

“We’re really going toward keeping cars in original condition,” he said, noting that the previous trend was toward total restorations.  “We want to keep as many great unrestored cars as we can. They are wonderful and we don’t want to restore these cars.”

In his typical way, Coker got plenty of laughs during the seminar with his dry wit and homespun observations.  At one point, he turned the discussion about driving and enjoying classic cars into an unexpected sales pitch.

“If it’s presentable and makes people smile, then get in it and drive it,” he said. “Why? Because it wears out tires.”

The topic of the classic-car hobby’s future focused on getting younger people interested in cars that were created before most of them were born.  The panelists agreed that getting technology-obsessed millennials interested in old cars could be problematic.

The only way to get young people to love old cars is to make sure that they are exposed to them, Martin said, including getting them behind the wheel.  “They have to be brought in and taught to like these cars because they didn’t grow up with them.”

Coker said he sees many young people coming into the hobby, inspired by their parents to appreciate the classic machines.  Beyond keeping the hobby going, he added, it’s important that people understand the old cars to thwart misguided anti-pollution efforts to get them off the road.  “There are a lot of green people who have no idea what we do.”

The overarching advice from the expert panel to potential buyers is to be savvy, clear-headed and well-informed.  The main way to avoid the pitfalls of classic-car collecting is to do your homework on the make and model before you start bidding, Carlson said.

“The No. 1 tool to have in your tool box is to do your research,” he said.