Though a sale, not an auction, we’re including this in a series of previews of January events.

When Tony Singer was a college student in Denver in the late 1960s, he went to the local Porsche dealership, not to buy but to look and to dream.

“You’re a young kid. They know you’re not buying.” Singer said of the dealership’s sales staff. “What do they do? They give you a poster.”

Singer put that poster on his wall, and a year after his graduation he was back at the dealership, this time buying a used Porsche 356.

“I started collecting thing related to Porsche,” Singer said. “I always kept my Porsche, but as I had other cars I’d collect things related to them, too, particularly posters.” 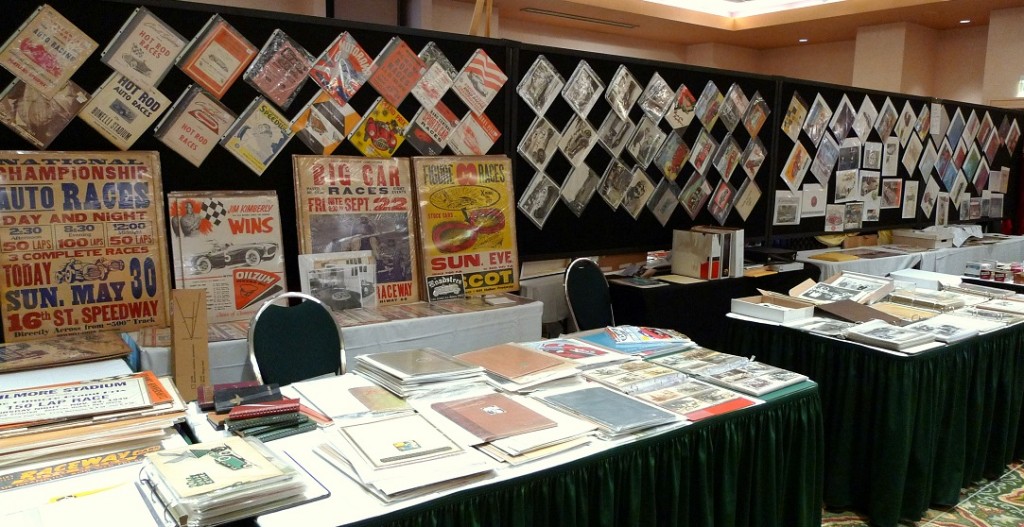 Singer’s poster collection grew, and grew some more, but always remained a hobby. While working as an artist and printer, he also restored and showed  cars (a Porsche 550 Spyder he restored is now part of Ralph Lauren’s collection).

Singer bought some of his posters at automobilia shows in Europe, events at which a variety of vendors sold various car-related collectibles. When he suggested to some British poster vendors they stage such a show in the U.S., they suggested Singer do it himself.

So he did, and thus was born Automobilia Monterey, held now for more than a dozen years in conjunction with those historic races and the Pebble Beach concours d’elegance. Automobilia Monterey has grown in to an event which annually features nearly four dozen vendors and attracts some 1500 customer/collectors.

“It’s only collectibles,” he said. “They don’t come for wine or food or pretty women or all the other stuff. They are people who know very precisely why they’re there, who have a pretty good idea of what they’re going to find, and it’s really become it’s own cool little event. It’s become a gathering of similarly minded people and has an energy that’s all its own.”

On January 16 and 17, Singer launches a second such showcase, Automobilia Scottsdale, from 10 a.m. until 6 p.m. each day in the ballroom of the Radisson Ft. McDowell resort, where original — no reproductions allowed — posters, photographs, rally plates, badges, pins, mascots, hood ornaments, signs, scale models, literature, books, original art and other auto-related collectibles will be offered for sale by more than a dozen vendors.

“We have a great mix of people with a wide variety of offerings,” Singer said. “One has badges. One has mascots. One has books. When the buyer walks in, they have a broad palette of things to choose. They may be looking for one thing, but then they see other things.”

Singer said prices typically start in the $10 range. “Most automobile tends to be less than $100,” he said, adding, however, that there will be items priced at as much as $15,000.”