Something fishy at the Petersen, where Jaguars are on the prowl

Did you know that the 1928 fishing season was a disaster in Massachusetts and residents blamed the state’s Dept. of Motor Vehicles?

Turns out that in 1928, the DMV added a fish symbol to the state’s auto license plates, but the fish was pointed away from the word “Mass.”

After the anglers’ uproar, the person who designed that 1928 plate was fired and the following year the fish pointed toward the state’s name and the fishing industry prospered.

Such tales are part of the new “License Plates: Unlocking the Code” exhibit that runs through March 30, 2014 at the Petersen Automotive Museum.

Officially, the exhibit celebrates the centennial of the first State of California license plate, but it includes plates from across the country and around the world. (As early as 1909, the Automobile Club of Southern California and the American Automobile Association produced license plates for California drivers, with the state taking over the business in 1914.) 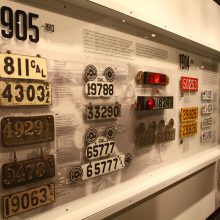 By the way, did you know that until 1972, each Argentine province had its own unique plate design, and those from the Neuguen region featured a water fall and were hand painted?

“There really is educational value to each plate in this display,” said Jeff Minard, a license plate historian who worked with the museum on the display. “At the same time, time, these unique pieces are displayed as art for everyone to enjoy.”

Also new to the Petersen — opening last weekend and running through February 16, 2014, is a special Jaguar sports car exhibit that showcases a 1937 SS100 formerly owned by entertainer Mel Torme, a 1949 XK120 used in the movie Gangster Squad, a 1956 XKSS formerly owned by Steve McQueen, a 1965 E-Type used in the television show Mad Men, and a 2014 F-type V8 S.