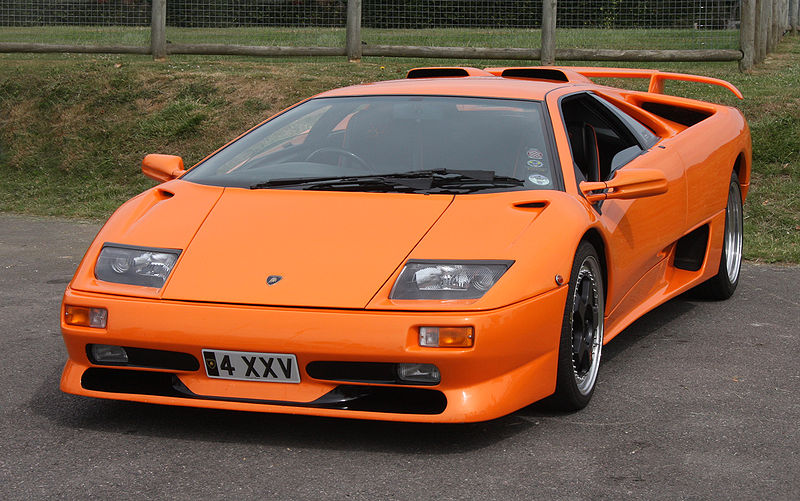 The 1st-gen Lamborghini “Diablo VT” was breathtaking to behold and is arguably one of the most beautiful, sexy and extremely-fast, exotic-supercars ever produced! This over-the-top, almost-as-fast-as-a-speeding-bullet, as aerodynamically perfect as anything earthbound could be, fire-breathing beast was designed by the infamous and proud Marcello Gandini, who had also designed the two predecessors in line to the “Diablo”, the Miura and the Countach.  The “Diablo” moniker was drawn from Spanish history and was the name of a famously ferocious, 19th century, fighting bull, which was owned and raised by the “Duke of Veragua”, who also happened to be the grandson and heir of Christopher Columbus! The edict was sent from the top brass at the time (around June of 1985) to design a vehicle that could reach a top speed of 315km/hr (approx. 196 mph, for us metrically challenged folk) and yet meet all the new (and ever increasing) emissions standards and safety regulations of the day. Rumor has it, that after the Chrysler Corporation had taken over ownership of Lamborghini in 1987, (which was right in the midst of designing the “Diablo”) they frowned at the angular design of the new model ( maybe to much like the Countach?) and had their designers in Detroit take a hand at smoothing-out the aggressive angles by massaging the bodywork into a more curvaceous look.

See all Lamborghinis for sale

Zero to 60 mph took just over 4 seconds and handling was unbelievably well-controlled, even under the most lead-footed of handlers, due to the perfectly-balanced weight distribution of the rear-facing, mid-engine and “VT” all-wheel-drive system, which automatically/electronically (or manually, depending on how the driver had the controls set) switched traction to the front wheels in the instance the rear wheels broke loose. Even though the “Diablo” overall was larger, wider, stronger and thus heavier than the “Countach”, it was still the fastest production car in the world at the time of it’s debut in 1990. The body was uniquely designed as well, using steel, composite and aluminum panels and retained those tell-tale Lamborghini “scissor-style” doors which opened straight up and angled forward out of the way. The new Lamborghini “Diablo” was also outfitted with more creature comforts and refinements than ever before but remained an icon of all that is Italian in supercar motoring and still draws a crowd every time one is seen in public.