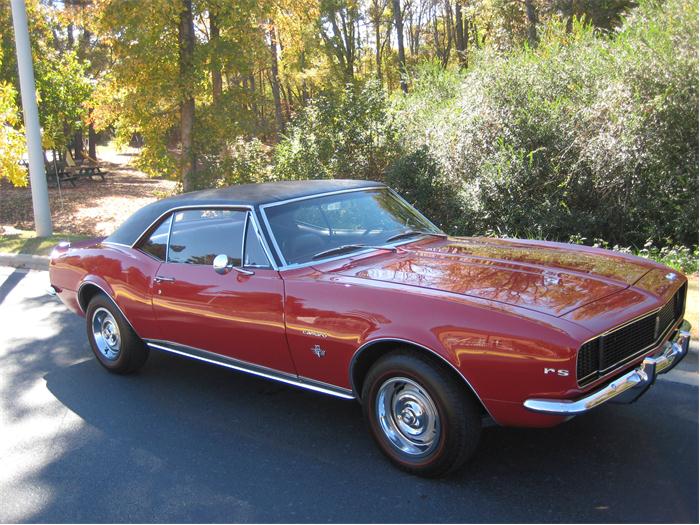 Sometime during April of 1965, long before any official announcement was made by General Motors’ Chevrolet Division, reports had begun circulating that Chevrolet was preparing to build a vehicle code-named “Panther” in the newly identified Pony/Musclecar category. This mysterious new vehicle was intended to compete directly with the highly successful Ford Mustang. The Ford Mustang was introduced in late 1964, as a “new for” 1965 model, and received rave reviews and huge sales numbers. Not to be outdone . . . GM had an ace up their sleeve to face this Ford rival, head on.

See all Chevrolet Camaros for sale

Chevrolet sent the first of two telegrams to 200+ automotive journalists on June 21, 1966, announcing their plans for the “Panther”, using very mysterious language. The first telegram read something to the effect of: “Please save noon of June 28, 1966 for important S.E.P.A.W. meeting. Hope you can be on hand to help. Details will follow .” The telegram was signed by John L. Cutter, Chevrolet Public Relations and S.E.P.A.W. Secretary. On the following day, the same group of journalists received another telegram to the effect of: “Society for the Eradication of Panthers from the Automotive World will hold first and last meeting on June 28. The (insert city name here) chapter will meet at (insert hotel name here) joining in a national 14 city live telephone conference with Detroit based , Chevrolet General Manager, E. M. “Pete” Estes. Please R.S.V.P. by telephone, etc….”.  This second telegram was also signed by John L. Cutter. Both of the telegrams left many automotive journalists puzzled at the time because none of them had ever heard of S.E.P.A.W. before the two telegrams were sent.

By June 28th, the industry was buzzing with anticipation and excitement about this big, strange meeting. Chevrolet’s General Manager, Pete Estes, would have some fun with this secretive game and make the announcement himself. Now, back in 1966, they used quite a cutting edge means of reaching more people collectively, in the Automotive Journalism society, than ever before possible. Rather than forcing all the 200+ journalists to make a trip to Detroit, GM utilized a new technological advancement by the Bell Telephone Company called two-way conference calling. It was the first time in history that 14 cities were connected together in real time for a press conference via telephone.

After a brief speech about how well things were going for General Motors and how they intended to remain the number one automotive manufacturer in the USA, Mr. Estes then said “Oh yes! I almost forgot! The purpose of this meeting! . . . Gentlemen, as much as we appreciate the tremendous publicity given “Panther” we ask you to help scratch the cat once and forever. And as such, this will be both the FIRST and the LAST meeting of S.E.P.A.W.! Chevrolet has chosen a name which is lithe, graceful, and in keeping with our other car names beginning with the letter “C”, it suggests the comradeship of good friends, as a personal car should be to its owner! Above all, it is the name of our new car line to be introduced on September 29, 1966! To us, at GM, the name means just what we think the car will do . . . GO! ….and here it is!”

At that moment, five beautiful girls came onto the stage, each holding a letter, while Mr. Estes held the sixth letter. While a narrator described to the out-of-towners, that could not see what was going on, Mr. Estes placed each girl in order and then lined up with them for all to see the word CAMARO. There was excitement and amazement and yet many were still puzzled at what it meant and what exactly was a CAMARO? The Product Managers, who fielded the many questions after the announcement about this peculiar, yet immediately likable name, only said (as smug as possible), it is “a small, vicious animal that eats Mustangs”.

And so, later that year, on Sept. 12, 1966 in Detroit, MI, the new Camaro was unveiled to rave reviews and an eagerly awaiting public hungry for their own GM produced pony/musclecar. And, as stated at the mysterious meeting back in June, the cars were available at Chevrolet Dealerships across the country on or about Sept. 29,1966.

Alrighty then… now for some details about the First Generation (1967 to 1969) Camaro or F-Body (a platform also shared with the new Pontiac Firebird) which was a built on a front-engined, rear-wheel drive platform and only available as a 2-door coupe or convertible. A wide variety of engines were available, ranging from the 230-cid L6 to the ultra rare optioned ZL1 (only 69 were ever made and only for the 1969 year model), drag-race ready, aluminum block 427-cid, big-block V8, or COPO 9560 (Central Office Production Orders) package, which added over $4,000 to the sticker price, which was a lot of money back then. But oh, what fun it must have been to stuff your foot into that one. There were actually over a dozen (14) different engines available during the first three years of Camaro production and some were only available to a choice few specifically for racing purposes.

Some of the available options, such as the RS, was an appearance package that included hidden headlights, revised taillights, RS badging, and exterior rocker trim. The SS, which included a 350-cid V8 engine or the optional L35 and L78 396-cid big-block V8 was also available in SS package. The SS also featured non-functional air inlets on the hood, special striping and SS badging on the grille, front fenders, gas cap, and horn button.  It was even possible to order both the SS and RS packages together to make a Camaro RS/SS. In 1967, a Camaro RS/SS convertible with a 396-cid V8 engine, paced the Indianapolis 500.

The Z28 option code which was introduced in December 1966 for the 1967 model year was the brainchild of Vince Piggins. He conceived offering a virtually race-ready Camaro which could be offered for sale from any Chevrolet dealer. This option package was not mentioned in any sales literature, so it was unknown to most buyers and dealers for that matter. The Z28 option required power front disc brakes and a Muncie 4-speed manual transmission be installed on these models. It also featured a 302-cid small-block V8 engine, an aluminum intake manifold, and a 4-barrel, vacuum-secondary Holley carburetor. Only 602 Z28s were sold in 1967, along with approximately 100 Indianapolis 500 Pace Car Replicas. The origin of the Z28 nameplate came from the RPO (Regular Production Option) codes – RPO Z27 was for the Super Sport package, and RPO Z28, at the time, was the code for a Special Performance Package intended to compete in the Trans Am racing series of the day. Many Camaro’s are raced, and very successfully I might add, in various forms and venues all over the world to this day.

There have been five generations in the life of the Camaro, with a brief hiatus in production from 2003 to 2009, with the awesome, retro-looking fifth generation Camaro making it’s debut in 2010. During the First Generation production run from 1967 to 1969, a total of 699,538 Camaros were made. You know what that means . . . there is a good chance that your favorite model, options and color are still out there and available for purchase .

Oh, hey, did I ever answer the question of the meaning of the Camaro name? When pressed for an answer, over a year later (sometime in 1967), as to how he came up with the name Camaro (which actually means friend, pal or comrade) from a list of over 2,000 words of which to choose, Mr. Estes laughed and casually admitted, “I locked myself in a closet and came back out with Camaro”!