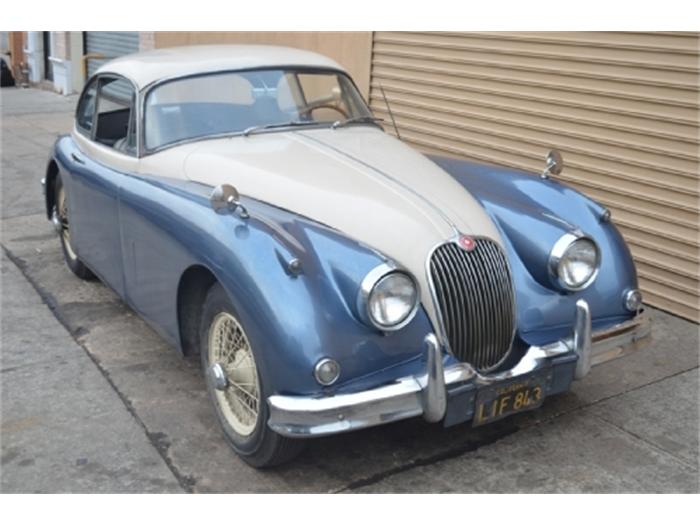 The Jaguar XK150 sports car was an upgraded version of Jaguar’s infamous, post-war, XK120/140 models and a very desirable vehicle in the XK model bloodline. The beautifully sweeping, yet bulbous body lines were very appealing to the eye, but the hierarchy at Jaguar was not convinced that the car would be as vigorously accepted by the general public due to its more pudgy looks, as compared to the earlier XK120 and XK140 models . . . but it proved them wrong.

See all Jaguar XK150s for sale

Today, it remains one of the most desirable, and I think beautiful, of all the early XK models. The Jaguar XK150 was introduced in 1957 and ran through the 1961 model year with various mechanical, evolutionary and technological upgrades over the 5 years of production, resulting in just fewer than 9,000 units (including some 888 units of the more powerful “S” models) being made. The Jaguar XK150 started out with only two models, the “FHC”, or Fixed-Head Coupe, and the “DHC” or Drop-Head Coupe (and all XK150’s were 2-door vehicles of course). As the Jaguar management felt the XK150 was going to be a success after its launch, they soon got to work adding a true “Roadster” to the lineup in 1958.

The Jaguar XK150 was actually the first production automobile in the world to come with four-wheel, “Dunlop” designed, disc brakes, which helped make it a great performer not only on the street, but also at the racetrack. The two-seater (the FHC and DHC models did have a very small jump-seat behind the front seats) sports cars were steel bodied on a boxed, sectioned steel frame and came with an aluminum hood (or bonnet). The Jaguar XK150 models were front-engine, rear-wheel drive vehicles with the standard engine being an in-line, six-cylinder, DOHC (double over-head camshafts) with 3.4L/210 c.i. displacement producing some 180 hp.  A “performance-tuned” or “S” engine option was made available, starting in 1958, boasting three, 51mm (2″) bore, “SU” brand HD8 model carburetors, pushing out 220 to 250hp.

In 1959, a larger displacement engine was also available on the “SE” (“Special Equipment”) and the now, most rare, XK150 “S” models, which displaced 3.8L/231 c.i. and could be tuned to produce at least 265hp. This latest version was capable of an impressive 0 to 60 mph time of just under 7 seconds (out of a straight six) and top speed of 135+ mph, while maintaining an 18 to 20 mpg fuel efficiency.

The new Jaguar XK150 came with a one piece, curved windshield glass, thinner doors, which made for a more spacious interior and a more comfy, leather-wrapped dashboard. The new, top-of-the-fender, front parking lamps had a small, red pilot light, which reminded the driver that the lights were on and steering was handled by a rack-n-pinion gear. The wheelbase of the Jaguar XK150 was 102 inches, overall width of 62.2 inches and overall length of 177 inches, while the car weighed in at around 3,000 pounds. Over its entire production run, the Jaguar XK150 was available in over a dozen different colors including my favorite . . . British Racing Green.