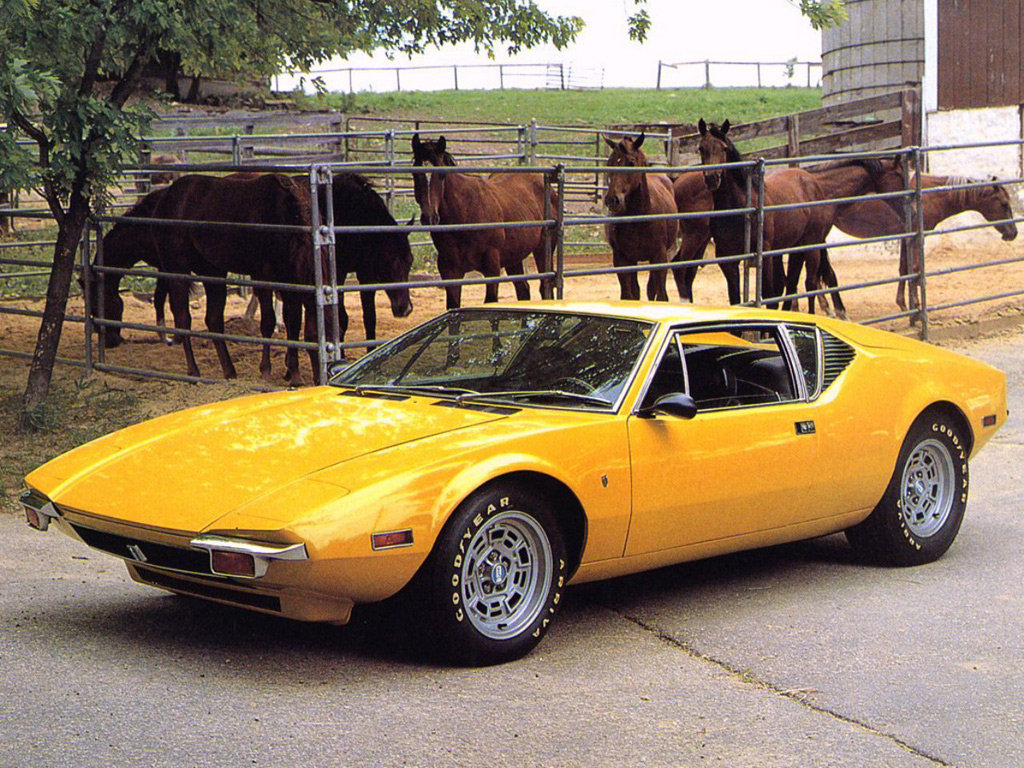 The De Tomaso “Pantera” was a mid-engined, production “Musclecar” made and designed in Italy (with support from the Ford Motor Company, mostly for powertrain components) and destined mainly for the U.S. market. It was produced from 1971 to 1991 and evolved over it’s 20 year-run into one of the worlds most unique exotics ever produced! This was also, in-part, due it’s odd (at the time) blending of “Italian” design, handling and craftsmanship and good-ole American V8, raw musclepower! I say, odd, because the “purists” do not consider it a “real” Italian sporstcar due to it’s half-breed combination of Italian and American components. However, it has remained a cult-status vehicle in it’s own right and has stood the test of time as one of the most respected, feared (by other makes that cross it’s path) and sought after marques of it’s time! Although this car was designed in Italy at Ghia (another company owned by De Tomaso at the time) by a US-born designer, named Tom Tjaarda, it is steeped in “Italian” history and exoticar styling. The De Tomaso Car Company of Modena, Italy, was founded in 1959 by Alejandro De Tomaso, an Argentinian-born immigrant and at one time, also owned the likes of the Maserati and Moto-Guzzi brands.

The “Pantera”, meaning panther in Italian, replaced the short-lived “Mangusta” model, which was De Tomaso’s second-ever production vehicle (which also was powered by mid-engined Ford V8) introduced in 1966 and running through 1971. Their first, was the even shorter-lived, “Vallelunga” mid-engined model, which used a European Ford, Cortina 4-cyl powerplant. The “Pantera” would also be the first De Tomaso vehicle to use an updated steel “moncoque” chassis, which replaced the aluminum “backbone” chassis of earlier De Tomaso mid-engined vehicles. The V-8 supplied by Ford was the 351C (Cleveland) model and was/is considered by most, to be the best of the Ford small-block, V-8 family. It made it’s first, official public debut in Modena, Italy in March of 1970 and then made it’s U.S. debut a few weeks later at the New York Motor Show to rave reviews. Production was brisk ,at first, and from 1971 through 1973 Modena pushed out over 6,100 units (some 7,260 total production in over 20 years)! But once the big oil “crisis” reared it’s ugly head (also in 1973) and the oil embargo started, not to mention the poor fit, finish and quality control problems they were experiencing at De Tomaso, the Ford Motor Company decided to pull the plug on importing these Italian/American musclecars, which they sold through their Lincoln-Mercury dealerships. De Tomaso continued to build the “Pantera”, mostly by hand (at about 100 per year) until 1991 (some say a few models trickled out until 1993), at which time all production ended and the “era of the Pantera” was over. More than a footnote in automotive history, the “Pantera” is a legendary vehicle which seemed flawed only by it’s human “handlers” of the day.

See all De Tomaso Panteras for sale on ClassicCars.com.