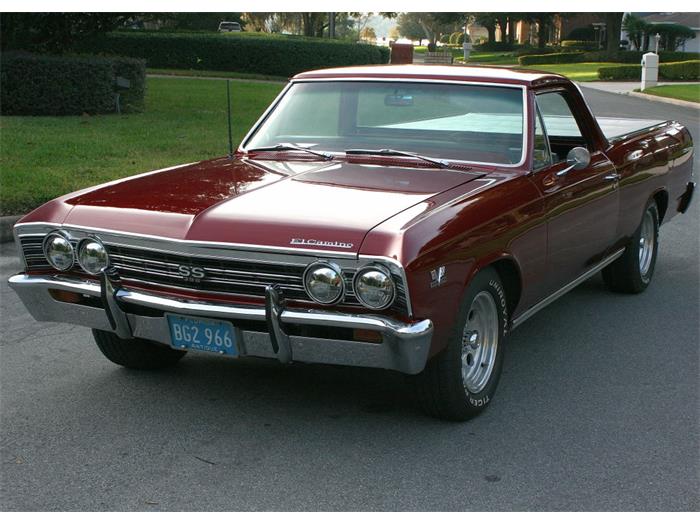 Chevrolet would drop the full-sized El Camino from their line-up for 1961 to 1963.  It re-emerged in 1964 based on a new, mid-sized Chevelle chassis and remain in production until 1987. GM’s Chief Designer, Harley Earl, actually suggested a “coupe-pickup” designed vehicle as early as 1952, but GM’s top brass did not act on that idea until Ford came out with the Ranchero in 1957. The El Camino name is of Spanish origin meaning “the road”.

Since the “First Generation” Chevrolet El Camino was based on a car chassis (as opposed to a truck chassis) all the trim options available in the corresponding model, Impala, Bel Air, Brookwood, Biscayne, etc. (and later on SS) were available. These creature comforts and more plush interiors were not yet available on the full-sized truck models of the day (other than the short-lived, 1955 through 1958 Chevrolet “Cameo Carrier” full-sized pick-up models) and were very well received by the public.

The El Caminos also featured the first Chevrolet built pick-up, with an all-steel (sheet metal, instead of wood) corrugated bed floor. A 235-cid L6, 283-cid V8 (in several variations and hp ratings) and even a 348-cid V8 (also a few variations) were available and all were offered with either a manual (3 or 4 speed) or 2-speed, Powerglide, automatic transmission. Initially, sales were good, then fell off by nearly 1/3 for 1960 (producing just over 14,000 units), possibly due to the fact that the cab only held up to 3 persons (at a time when the country was experiencing a major growth spurt due to the baby-boomer era). Maybe, a concept ahead of its time (as a crossover type vehicle), the Chevrolet El Camino would leave the scene for a few short years and re-emerge in 1964 based on the new, mid-sized Chevelle platform.

For 1965, a minor facelift was given to the front end (with a V’d grille shape similar to the newly designed, full-sized Chevrolets).  An even more powerful 327-cid V8 rated at 350 hp was an option as well as all the engine offerings for 1964.

The 1966 El Camino received another minor facelift with some massaged sheet metal and slant-cut front fenders where they mated, at the more aggressively angled, grille area. The interior was freshened-up, including a horizontally sweeping speedometer and instrument cluster. And finally, an optional 396-cid V8 (big-block) was offered, in several variations from 325 to 375 hp.

For 1967, the El Camino again carried the features of the Chevelle forward of the B pillars and was given a more pronounced grille area, front bumper and available trim work (an optional vinyl roof was even offered). Air-shocks were still standard equipment in order to compensate for load weight and disc brakes were now an available option.  A new TH400, 3-speed Turbo-Hydromatic, automatic transmission for the 396-cid engines was also available. An energy-absorbing steering column and dual-reservoir, brake master-cylinder were now standard equipment due to federal mandates.

The “Third Generation” Chevrolet El Camino was produced from 1968 through 1972 and featured a completely new, longer, Chevelle-based chassis and body re-design. All new sheet metal and more aggressive looking, forward-styling, enhanced the performance look and sporty feel of the new models. Again, power front disc-brakes and now, a posi-traction rear axle were available as options. The interior was totally re-designed with cloth/vinyl or full-vinyl bench seat or optional full-vinyl Strato bucket seats and center console. Deep-twist carpeting was standard and interior trim was shared with the Chevelle/Malibu models.

For 1969 the El Camino front grille area and surrounding body area was more rounded in appearance and kept the quad headlamps (now with a single-bar divider). The parking lamps were located in the slotted bumper. This is the first time a 350-cid V8 would be available in the El Camino. A revised instrument panel with round instrument design replaced the previous horizontal look and power windows and door locks were an option. The Super Sport package, including various versions of the 396-cid V8, now featured a blacked-out grille with “SS” emblem in the center and double, raised bulges running front to rear (from the mid to rear) of the hood, leading to a chromed grate.

The 1970 El Camino saw some interior redesigns and new exterior sheet metal that gave the bodywork a more squared-off look. The 396 badging was kept, even though the displacement was increased to 402-cid and the LS6, 454-cid big-block V8 with some 450 hp was now available.

For 1971, the El Camino received a new front end redesign, with single-unit, Power-Beam, headlamps like the Chevelle now used and integral park/turn/side-marker lamps. As the Feds were cracking down on those air-polluting emissions, GM was forced to add the dreaded smog pumps to their engines and reduce compression and horsepower at the same time.

The 1972 El Camino came with a front fender safety, side-marker/parking lamps and a re-vamped, twin-bar grille. Again, due to global standardization and ever tightening emissions mandates, all vehicles would now use net instead of gross horsepower ratings and the power decrease was across the board. The SS models would become diluted and now any V8 engine could be ordered with this option.

The “Fourth Generation” Chevrolet El Camino was produced from 1973 through 1977 and again, was based on the Chevelle, (A-body) station wagon chassis. It was the largest and heaviest vehicle of the entire series and featured the government mandated, safety, impact-absorbing bumpers front and rear. Two trim packages were offered, the base model and the SS. Front disc-brakes were now standard and the wheel track, front and rear, was increased by one inch for better stability. Coil springs at all four wheels were computer-selected by weight of added options to make for smoother ride and handling properties. Several new features included a double-panel acoustical roof, sturdier designed side-door guard beams for structural integrity, flush-style outer door handles, better fitting glass seals for wind-sound reduction, full, flow-through power vent system, inside hood release and contour-molded foam seats and backs. Visibility was increased by thinning out the front glass pillars and longer trips between fuel stops with a new 22 gallon fuel tank.

For 1974, the El Camino had a revised (Mercedes-style) grille, a new trim package called the Classic was available.  It offered a more luxurious interior with cloth or vinyl upholstery and carpeted door panels and woodgrained panels on dashboard. The 350-cid V8 was now the base and a 400-cid V8 was introduced and the 454-cid V8 was still an available option.

The 1975 El Camino saw another new grille design, dual remote-operated outside mirrors and radial tires with refined suspension for a smoother, quieter ride. Creature comforts such as intermittent wipers, “Econominder” instrument package complete with vacuum gauge (to monitor fuel consumption) and cruise-control were offered, along with some standard features like H.E.I. ignition, which improved performance and minimized maintenance. The 250-cid L6 with 105 hp was offered as the base engine and this would be the last year for the 454-cid V8 which was now reduced to 215 hp due to emission standards choking the life outta that big-bore monster.

The 1976 El Camino remained unchanged for the base models and only a cosmetic change of new “stacked” rectangular headlamps was evident on the Classic models. The 1977 El Camino again remained visually unchanged from the previous year but lost the availability of the 400-cid V8.

The “Fifth Generation” Chevrolet El Camino was produced from 1978 through 1987, which was the last year for the series. The El Camino, once again, shared some suspension components and front-end sheet metal with the Chevelle Malibu, but this time, had its very own specifically designed chassis. Four models were available through the final run of the “coupe/pickup” including the El Camino, Royal Knight, Conquista and Super Sport. A totally new, slimmer, angled and chiseled looking body style emerged for the final 10 year run with a one-inch longer (117-inch) wheelbase. The doors were borrowed from the Chevrolet Monte Carlo and the tailgate and rear bumper were shared with the Malibu Station Wagon. The slightly protruding, grille area included new larger, single rectangular headlamps. As downsizing was now the norm, the base engine was a 200-cid V6 with 94 hp, with optional powerplants of 231-cid V6 (Buick manufactured) with 105 hp, 305-cid V8 with 145 hp and the 350-cid V8 with 170 meager hp.

For 1979 El Caminos, very little was changed, aside from the visibly divided grille panel and under the hood was a new 267-cid V8 with 125 hp. For 1980, the El Camino remained nearly identical cosmetically, but again, under the hood the 200-cid V6 was bumped to 229-cid and hp rating increased to 115, the 305-cid V8 now with 155 hp and the 350-cid V8 was discontinued. Most vehicles now came with the automatic transmission but the 3-on-the-tree was standard.

For 1981, the El Camino sported a new vertical designed grille and under the hood a new GM “Computer Command Control” system to help reduce emissions even further and again, horsepower ratings were down across the board. The automatic transmission also received a lock-up type torque-converter for better highway mileage.

The 1982 through 1987 El Caminos remained basically the same and were treated to a quad-rectangular (side-by-side) headlamp arrangement and cross-hatched grille pattern. A dismal performing, dog of a diesel motor (350-cid V8 with 105 noisy hp) was an option for 1982 through 1984. In 1983, the 267-cid V8 was dropped and from 1984 to 1987 the SS model borrowed the front end of the Monte Carlo SS and offered the 305-cid V8 with 190 hp. In 1985, Chevrolet transferred production of all El Camino models to their plant in Mexico and through 1987 the 262-cid V6 was the standard engine. Somehow ironic, the long running El Camino model would end its life south of the border at a plant in Mexico.

Find a classic Chevrolet El Camino that you love!