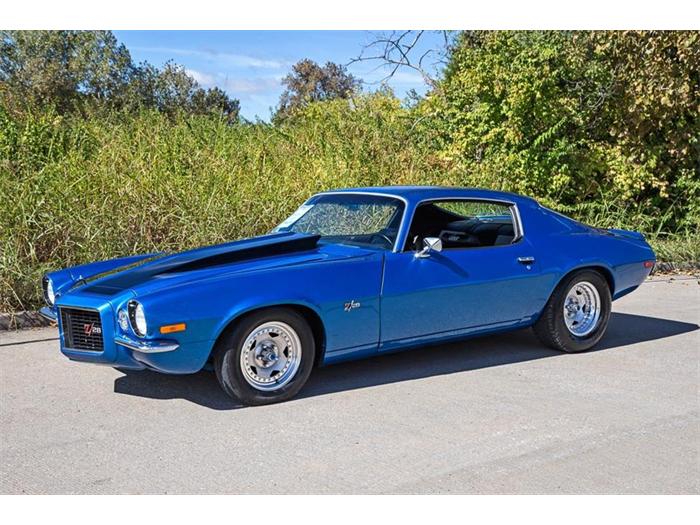 After the dazzling debut and extreme popularity of the 1st generation (1967 through 1969) Chevrolet Camaro, GM’s Chevrolet Division’s designers and engineers (inspired by the likes of Jaguar, Ferrari and Aston-Martin designs of the day) were challenged to give the next generation Pony Car a fresh new look and some added technological upgrades. For the 2nd generation Camaro (1970 thru 1981), there were obvious body style changes made, including lower, wider and longer dimensions. Some chassis and drivetrain upgrades were made and eventual horsepower downgrades were in the works as well (mostly due to pressure from EPA to meet continually restrictive, emissions standards) throughout the model run. Even so, some enthusiasts will argue that the 2nd generation Camaros, nicknamed the “Super Hugger”, were more a true driver’s car and quite possibly, the best all-around Muscle Car ever made.

The newly redesigned Chevrolet Camaro two-door coupe (the convertible was no longer offered), complete with fastback styling, would get a late start as a 1970 model (released in February of 1970). This would eventually make it the most sought after year of the second generation Camaros, due to low production numbers (just under 125,000 units) and more powerful drivetrain offerings.

Some notable changes throughout the second generation Chevrolet Camaro series were:

1970 – Totally new, re-design of body (all of Fastback 2+2 style) and upgrades to chassis, available in base Sport Coupe, RS, SS and Z/28 models. They were approximately two inches longer, an inch lower and just less than an inch wider than the first generation Camaros, with a longer hood and shorter rear trunk/deck area with a Kamm (flat cut-off) back styling with round, inset Corvette-like tail lights. The longer doors were of a full-glass (vent-less) design and gone were the rear quarter-panel, side panel windows. The roof panel was of a new double-panel design to increase roll-over protection and deaden sound. The base models featured a full front bumper, while the rest of the models all had a more aggressive looking, extended, rubberized “Endura” material surrounding a sunken grille, with chromed bumperettes on each side of the open grille. The new instrument panel featured several round gauge clusters, placed directly in front of the driver with other controls and radio near the center. The standard interiors were offered with an all-vinyl material and the dash was finished in a matte black color. An optional upgraded vinyl/cloth interior was offered along with some woodgrain surfaces. The largest engine available was the 396-cid V8 (which actually displaced 402 c.i., but Chevrolet decided to retain the “396” badging) which was rated at 375 hp and was only available in the SS models and came with 4-spd manual transmission, also available in the SS, was the 350-cid, 300 hp V8, again, with the 4-spd manual transmission. The six cylinder engine, available in the base Sport Coupe, was increased to 250-cid, 155 hp, from the former 230-cid powerplant and an optional 307-cid, V8, 200 hp, was also available. The RS models were available with the 250-cid L6, with 155 hp or the 350-cid V8, with 250 hp depending on your option choice. The Z/28 (Special Performance Package) was only available with the new high-performance LT-1, 350-cid, V8, 360 hp, powerplant. Transmissions available were a 3-spd standard, 4-spd standard (with Hurst Shifter) or Turbo-Hydramatic 400/3-spd automatic transmission.

1971 – Minor changes were made mostly in the appearance area (colors, stripes, badging, etc.) and the standard interior was now of the vinyl/cloth design. Also in the interior was the addition of the high-back bucket seats with built-in headrests that were not adjustable. Due to tougher emissions standards imposed by the government, most horsepower ratings declined in the performance offerings. The world was beginning the change-over to unleaded fuels and all manufacturers were scrambling to meet these more restrictive emission standards. Due to a corporate-wide, GM strike in late September, 1970, (which lasted 67 days) production was down for the 1971 year models. There were even rumors at GM about the demise of the F Body cars (Camaro and “sister” Firebird) because of declining interest in the PonyCar market and high insurance rates for all performance vehicles. Also, production of Camaros was halted at the Van Nuys, CA plant and were now produced at only the Norwood, OH assembly plant.

1972 – Again, minor changes are made to a faltering model, which again, is hit by a devastating UAW strike lasting 174 days. The internal battle to continue the F body cars went on at General Motors/Chevrolet and finally the supporters of the models won out and convinced the top-brass that it was still a viable vehicle. Only some 68,000 Camaros would be built in 1972, including only about 970 SS-396 models. This was also the last year for the SS models in the second generation run and the Z/28 model would lose the “/” and now be the Z28. Horsepower ratings continued to fall and even more so because the world was changing from gross to net ratings. For instance, the LT-1, 350-cid V8 dropped from 330 hp gross (1971 rating) to 255 hp for 1972 net ratings.

1973 – Standard impact absorbing front bumpers were added due to government safety legislation and again the horsepower ratings dropped and the 396-cid V8 was dropped. A new model LT was introduced and could be ordered along with the RS and Z28 to have all combinations in one car. The LT came with a more luxurious, quieter interior, full instrumentation, Rallye styled wheels, “hidden” wipers, sport mirrors and variable-ratio steering, among other available upgrades. Power windows were again offered, which had not been available since the 1969 year models. After a rough year and recovering from the previous year’s strike, they managed to build over 96,000 units.

1974 – A forward slanting grille was added to accommodate the new aluminum front bumper, which was added to meet further government safety standards. A similar rear aluminum bumper was added for the same reasons and overall the two new bumpers increased the length of the Camaro by some seven inches. The round rear taillights were replaced by elongated, rectangular, corner-wrapped units and sales would increase to over 150,000 units (despite the fuel crisis, which was initiated by the Arab Oil Embargo). Most of the Camaro’s (and Firebird’s) traditional competition would fall by the wayside and from now through the end of its run in 1981, the Camaro would be the reigning PonyCar with no real competition.

1975 – Interiors were changed slightly with new trim patterns and you could supposedly order a leather interior in the LT models (even though none were ever produced) and the walnut trim was replaced with a Bird’s Eye Maple woodgrain. Power door locks were now available and radial tires were standard equipment on all models. The rear window area was changed to a more wrap-around fastback style and gave greater visibility. The “Camaro” nameplate was removed from the rear trunk lid and the front fender scripts were changed to block letters. The “Camaro” badge was removed from the grille and a badge was placed on the cowl above the grille area on the front nose. The Z28 was dropped and would not reappear until 1977. The catalytic converter was introduced as a more efficient means to reduce emissions, which ended the use of a true-duals, exhaust system. Sales were again pretty strong at over 145,000 units for 1975.

1976 – The sales kept climbing as Camaro/Firebird now owned 100% of the PonyCar market and over 182,000 units were produced for 1976. A few appearance updates were made and the LT models received a brushed metal insert on the rear panel. All V8 models were now supplied with standard power-brakes.

1977 – The reintroduction of the Z28 was mostly due to the extreme popularity of the Firebird Trans-Am of 1976 and was a mid-year addition for 1977 Camaros. This late addition was an immediate success and very popular with a 350-cid V8, 4-barrel carburetor and producing 185 hp. Most of the Z28’s were supplied with creature comforts, like air-conditioning and automatic transmission. The Borg-Warner Super T-10, 4-spd manual transmission was still available, as well as the new intermittent wiper system. Over 218,000 units were produced for 1977 and the first time that Camaro outsold the Ford Mustang. A stripped-down Z28, in the hands of a capable driver, could outperform the Pontiac Trans-Am and even the Corvettes on any highway or even a twisty canyon road.

1978 – The Camaro would receive new bumpers front and rear for 1978 with rubberized, body-colored covers and the hood would now contain a “scoop”. Sales again increased to over 272,000 units and make a strong statement to those who had doubted it just a few years ago.

1979 – The “LT” model would be replaced by the more luxurious “Berlinetta” model for 1979. A re-designed instrument cluster, with flatter looking fascia, would replace the aging dash area in front of the driver. The “Z28” came with a new front spoiler and fender flares and some new decals. The rear window now had an electric “defogger”, embedded in the glass. Another record year for sales with over 282,000 units being produced, breaking all previous sales by first or second generation Camaros.

1980 – The old reliable standard 250-cid L6 motor would be replaced by the new 229-cid V6. The Z28 hood got a new rear facing, raised, functional scoop with a solenoid actuated flapper valve, which opens under a full throttle position. New, optional grey 5-spoke rims were available for the Z28 and standard on all Z28’s was a newly styled upper and lower front grille and revised, colorful graphics. All speedometers now read a maximum of only 85 mph, reduced from the previous reading of 130 mph. Total sale figures fell to just over 152,000 units for 1980.

1981 – Virtually unchanged from the 1980 models, the 1981 Camaro would be the last of the second generation Camaros and the end of an era. Changes made were mainly government mandated, in order to increase fuel efficiency, while reducing emissions. A new computerized control system was used (CCC or Computer Command Control) with an oxygen sensor, electronically controlled carburetion system including a throttle position sensor, coolant temperature sensors, barometric pressure sensors and manifold absolute pressure sensors, along with the dreaded check engine lamp. This was only the beginning of changes that would take us out of the mechanical age and into the electronic age of today. The automatic transmission was also fitted with an electronically controlled, lock-up torque converter. This modernization (emissions restrictions) reduced the output rating to 175 hp for the 350-cid V8 in the Z28 and was now only available with an automatic transmission. The RS model was dropped this year and would not reappear until 1989. Total production fell again, to just over 126,000 units.

It was a great run for the second generation Chevrolet Camaro and they not only proved themselves as daily drivers that were loved by many, but also as great racing machines that dominated many series and all sorts of racing venues all over the world. The IROC series for one was totally dominated by the Camaros of the day.