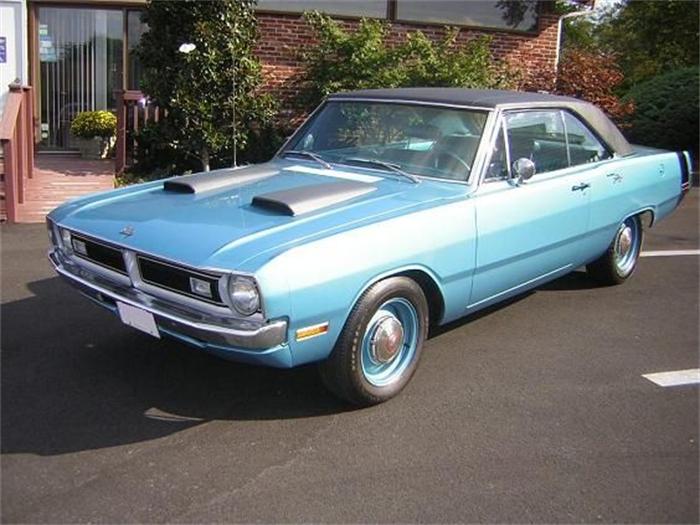 The 1970 Dodge Dart was available in a 2-door coupe, 2-door hardtop and a 4-door sedan. The convertible models were dropped after 1969. For 1970, the Dart was freshened up with new sheet metal, front and rear. The grille and rear end designs were fashioned to look more like their full-sized counterparts. Trunk space was reduced to nearly half the size of the 1969 models and the tail lights were rectangular units set into the angular, wedge-shaped, chrome rear bumper.

After 1969, the Swinger 340 was the only true performance model in the Dart lineup. The Swinger name was also added to all Dart 2-door hardtops, with the exception of the high-line custom models and the GTS package.The Swinger 340 came with a pair of cool looking, slanted, but non-functional hood scoops. It was also equipped with front disc brakes, 14-inch bias-ply Fiberglass-belted tires on fashioned steel Rallye rims (keeping with the rage of the day). The Swinger 340 also came with beefed-up Rallye style suspension upgrades, including a 3.23:1 rear axle ratio and the rear 1/4 panel bumble-bee stripe and 340 decals. Options included: all-vinyl bucket seats, a center floor-console, a 6000 RPM tachometer, flat-black painted hood scoops and cool hood-pins, a custom vinyl roof in either black or white, power brakes, power steering and power windows were also available. Oddly enough, the only radio offered was an AM radio!

I did not own a Dodge Dart, but I did have a 1970 Plymouth Duster 340. It was a very quick and fun car to drive. That 340 motor could be tuned to produce some real arm-stretching, neck-snapping, slingshot like “G-forces” when you stuffed your foot into it! I had a blast with that little car and hold fond memories of the days cruisin the strip, red-light racing (stoplight to stoplight) and sitting in muscle car row at the outdoor theater!