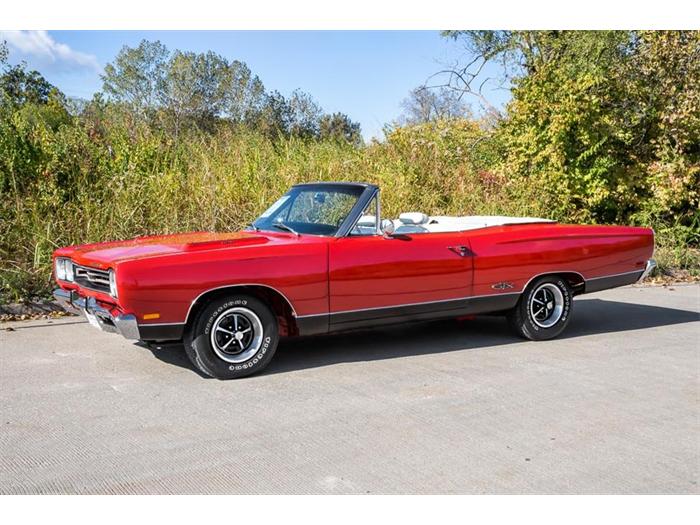 The Plymouth GTX was produced from 1967 to 1971 and in that short period of time went through three different design changes (3 generations). The Plymouth GTX was based on the Belvedere mid-sized chassis and was introduced as a more refined, more luxurious, bettering performing Muscle car. Although it was based on the 116-inch wheelbase Belvedere chassis, the GTX was only available with upgraded heavy-duty suspension.

See all Plymouth GTXs for sale

The heavy duty suspension was needed in order to handle the standard 440-cid, “Super Commando” V8 with a 4-barrel carburetor, producing a potent 375 hp.  The optional 426-cid “Hemi” V8 which produced a whopping 425 hp in box-stock form was also available.  Later, an option of three 2-barrels or a “Six-Pack” dubbed “440+6” was also available, making around 395 hp. The Plymouth GTX was only available as a 2-door hardtop or convertible and came standard with the TorqueFlite 3-speed automatic transmission or an optional 4-speed manual transmission.

For 1969, the GTX received a subtle facelift including an optional, and now functional, “Air Grabber” hood with dual side-facing air vents. The hood and “Air Grabber” vents were also painted (by over 3/4 of its total area) with two flat-black racing stripes on top of the body color. Those flat black stripes, a bit thinner of course, were also applied to the rocker panel and fender/quarter panel areas as well. Also new for 1969 was a heavy-duty battery, a higher performance camshaft with larger valves and ports to match, chrome exhaust tips, red or white colored reflective safety stripes on front and rear areas and probably the biggest new option of a Hurst shifter was now available. Several rear-end gearing options were offered to enhance performance and front disc brakes were also available.

However, as popular as the GTX was, mainly due to performance “bang for the buck”, sales dropped in 1969. This was somewhat due to the fact that the ever popular Road Runner, was now available in a convertible model as well (this would also be the last year a convertible would be offered in GTX garb).  15,602 GTX units were produced in 1969 and only 700 were convertibles and Hemi’s accounted for 207 units. You can see why these cars today can bring pretty big money at the sales and auctions around the globe!