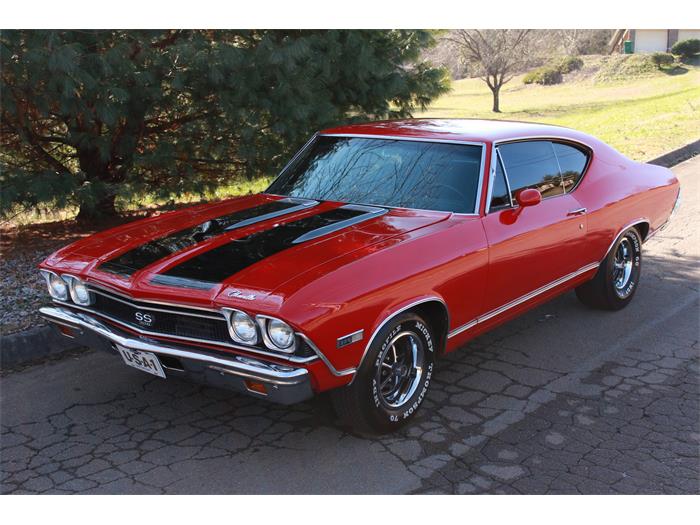 The 1968 Chevrolet Chevelle “SS396″ was the only year that the Super Sport or SS was its own separate model which can be distinguished by a VIN# starting with a 138.  The only engine available in a 1968 Chevrolet Chevelle SS model was the 396-cid V8 (all with a varying type of 4-barrel carburetor), which came in only three forms . . . 325 hp, 350 hp or 375hp. This is what today’s ‘Internet Bible” (Wikipedia) says a Muscle Car is: “Muscle car is a term used to refer to a variety of high performance automobiles.” The Merriam-Webster definition is more limiting, “any of a group of American-made 2-door sports coupes with powerful engines designed for high-performance driving. The term generally refers to 2-door, rear-wheel drive, family-style, 4+ passenger mid-size cars (and, by some, full-size cars) equipped with large, powerful, V8s, and sold at an affordable price for mainly street use and sometimes both formal and informal drag racing.”

See all 1968 Chevrolet Chevelles for sale

Well, I guess that sums it all up. Or does it? I wonder if the people who wrote those descriptions have ever really driven a true Muscle Car? And if so, would they not have mentioned the way in which your adrenalin starts to flow as soon as that fire-breathing V8 roars to life, sits there rumbling at idle like a nervous cat getting ready to pounce on its prey. And before the car ever moves even an inch, you can just hear, smell and feel the raw horsepower just waiting to be unleashed by the mere pressing of a small pedal on the floor? And what about when you sit in the seat, drivers or passengers, it makes no difference, and you are immediately pinned into that seat the moment you mash your foot into that accelerator pedal and release the clutch, which, in turn, breaks loose those big, oversized, rear tires and you conjure every muscle in your body just to try and pull yourself out of the upholstery long enough to bang the clutch to hit second gear, just as she starts drifting a bit sideways, you again, pull every shred of power you can muster and slam her into third gear, both rear wheels still spinning (because you have “posi-traction” of course) and that big V8 just screaming to be unleashed from it’s mounts and trying to twist itself right outta that frame, which at the moment, is doing all it can to merely control the beast and by now the smoke from the tires is so thick and engulfing the whole car that you can barely see where you’re headed, the look of horror on your unwitting passengers face is priceless (today those videos would go viral on youtube) and for a split second you even wonder . . . is she gonna grab traction and launch us like a slingshot into the future or am I gonna try to pull my foot off that small pedal on the right long enough to regain control before that cop pulls a u-turn and tries to catch up to me to give me another ticket for having far too much fun. As a good old friend of mine once said (and I am sure he stole it from somewhere) “It’s a much fun as a human-being can possibly have . . . with your clothes on!”

Pick of the Day: 1965 Oldsmobile Starfire

Question of the Day: What is your favorite shifter design?