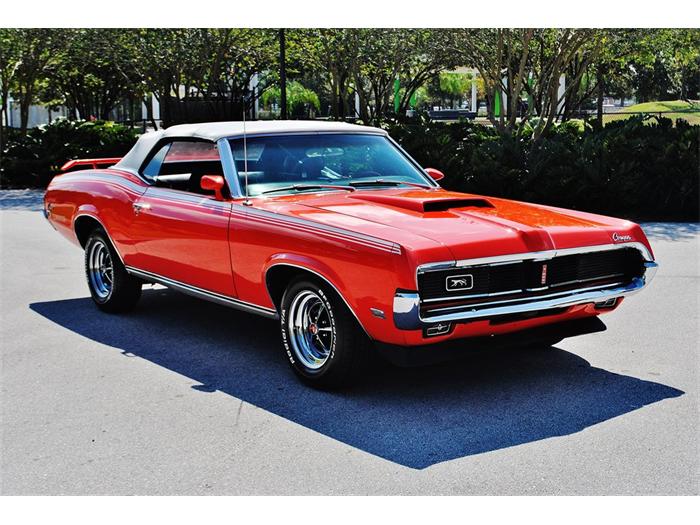 In 1967, Mercury officially entered the Pony Car arena with the introduction of their Cougar models. The Mercury Cougar was designed to be a sport/luxury vehicle intended for the pony car market. It was also designed to compete with its counterparts not only in the USA but also in Europe.

The Mercury Cougar immediately gained acceptance and was even extremely successful in the racing circuits of the day with involvement of greats like Dan Gurney, Bud Moore (NASCAR), Parnelli Jones, Ed Leslie and former Carroll Shelby employees Nels Miller, Mark Waco and Bernie Kretzschmars. They worked together on a Cougar race team for famed Indy car owner Bob Estes, racking up a record six wins in ten races for 1967.

The Mercury Cougar was designed as a slightly larger-sized vehicle (after extensive study results were compiled by means of corporate and public surveys). It was more luxurious in options and offerings than the Ford Mustang, on which it was based. Mercury designers worked to combine all the best qualities of the Ford Thunderbird and Mustang models.

The target market for the Mercury Cougar was a younger, upscale, well-educated, more discerning, married with family buyer. It was ultimately geared toward the male ego. The 111-inch wheelbase was 3 inches longer than that of the Mustang and overall length was 6.7 inches longer as well. The Cougar also weighed approximately 200 pounds more than the average Mustang but possessed a softer more comfortable ride in stock form. The Cougar still had the characteristic short rear deck area and long hood area in keeping with the Pony Car styling cues.

All early Cougars were of the two-door (notchback-style) coupe design and a convertible was added in 1969 and continued for 1970 (culminating the end of the first generation of the Pony Car year models). The Mercury Cougar would only be available with a V8 powertrain (of several various displacements from 289-cid to 428-cid over the 1967 to 1970 year models) and coupled to a 3-speed or 4-speed manual transmission or 3-speed automatic transmission.

1967 and 1968 were virtually the same except for larger displacement engine offerings for 1968 and some subtle styling changes (i.e. federally mandated side-marker lamps for 1968). The signature fender to fender (with center divider) “electric razor” looking grille, with closely spaced vertical chrome inserts and concealed headlamps were all a part of the more sophisticated look and functionality.  The rear, nearly body-wide, sequentially flashing turn signals/tail lights (borrowed from the earlier Ford Thunderbirds) also added to the sophistication. Crisp bodylines and angular styling gave the car a unique, aggressive tough guy look.

The sportier GT package offered more performance upgrades (like 390-cid big-block engine) than the base model Cougar.  The even more luxurious XR-7 package was offered and comprised of a competition styled cluster walnut wood grained dash/console area and steering wheel inserts, leather/vinyl covered seats and a leather automatic shift-control handle. An extra special XR-7G option (“G”, for the racing legend Dan Gurney) was offered and came with all sorts of special performance goodies like racing-style hood pins (then popular), a center hood scoop and even some Lucas fog lamps. A mid-year (1968) introduction, GT-E option, saw the use of the 7-Litre, 427-cid and even later on the 428-cid Cobra Jet “Ram Air” engine, which was intentionally under estimated at 335 hp. Some 150,000 total units were produced in 1967.  In 1968, those numbers dropped to about 113,000 units (619 were XR-7G’s and 602 were GT-E’s, only 244 with the 428-cid C/Jet engine).

The 1969 Mercury Cougar welcomed the introduction of the convertible model along with a few other subtle styling changes (including more engine offerings).  Weight was added with a wider and longer wheelbase. The grille had now changed to horizontal fins instead of the vertical style (electric shaver) models. Some optional enhancements to the front-end area included a spoiler and Ram-Air induction style hood scoop.

An Eliminator performance package was offered for the first time which included a 351-cid with 4-barrel carburetor, or optional 390-cid with 4-barrel carburetor or even 428-cid “CJ” (Cobra Jet) or 302-cid “Boss” motors. The Eliminator was detected visually by the blacked out grille area and further enhanced by standard front and rear spoilers, special striping and better performance/handling suspension package. However, the awesome XR-7G and the GT-E options were both dropped for 1969. Production dropped again to 100,000 total units for 1969.

1970 saw the final year of the first generation Mercury Cougar and only a few changes from the 1969 version. The hood now contained a center tooth which divided the new grille area in two. The black grille/headlamp covers had reverted back to the vertical electric-shaver style fins. Inside the car we saw some new interior patterns and a federally mandated, lockable, steering column to help deter theft (however, as always, the thieves quickly figured out how to circumvent that minor setback to their craft) . The 351-cid engine was now available in both the standard Windsor with a 2-barrel carburetor and the new Cleveland, 300 hp (with 4-barrel carburetor) versions.

1969 and 1970 convertibles were produced in small numbers and today are very prized among collectors. Total production for the 1970 year model dropped to 72,000 units. The muscle car era was being heavily scrutinized each coming year, until they all but eliminated performance as we knew it.