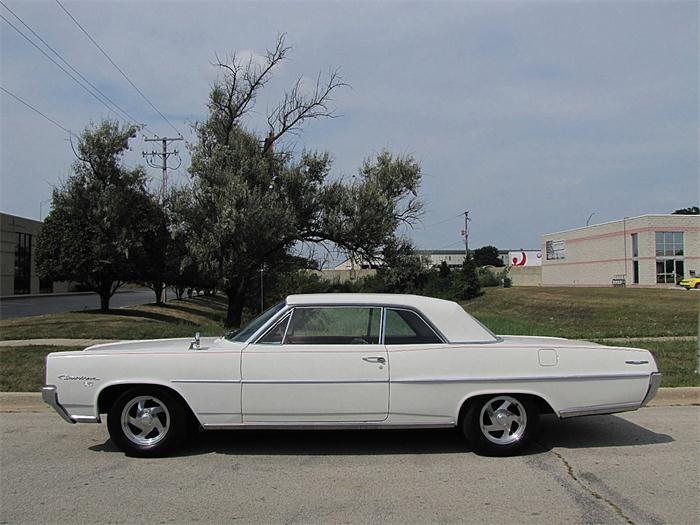 For 1964, in keeping with their quest to remain a major force in the performance genre, Pontiac introduced a Catalina based, 2+2 (taken from the European style, sport touring models with seating for 4, even though you could easily seat 5 or more in the Pontiac 2+2 version) optioned, full-sized, performance, driving machine for the family. While Pontiac held onto the number 3 position in the USA for vehicle sales from 1962 through 1969, nobody could dispute the dominance of the Pontiac brand for performance.

The 1964 Pontiac Catalina 2+2 was only available in a 2-door hardtop-coupe or convertible configuration and had a 119-inch wheelbase. They were all front engine and rear wheel drive vehicles. The standard engine was the 389-cid V8, with 2-barrel carburetor producing some 283 hp and a manual 3-speed transmission with a floor shifter mounted in the center console. The optional engines were the 389-cid V8 with 3-2barrel carburetors (Pontiac’s infamous Tri-Power setup) producing some 330 hp and the 421-cid V8 with 4-barrel carburetor producing some 320 hp (plus a few specially tuned 421’s with up to 370 hp were rumored to be produced as well) and an optional Hydramatic, automatic transmission or 4-speed manual transmission were available. Since 1964 was the first year, the 2+2 was basically a trim option with special badging including “2+2” on the front fenders, hood and interior. Also some interior upgrades like special door panels, Morrokide bucket seats up front and center floor console with vacuum gauge were standard or available options.

For 1965, the Pontiac Catalina 2+2 had a facelift and its wheelbase increased to 121 inches, which improved handling characteristics. It would also become the most popular and sought after version of all the 2+2’s made. The front fenders capped and were cut-back just below the upper headlamp and now contained vertical louvers or “gills” situated behind the front wheel openings. The interior upgrades for the 2+2 again included the bucket seats, full carpeting, floor console and special badging.  Outside had custom pinstriping and special hood and rear deck “2+2” badging and under the hood they had chromed valve covers and air-filter housing.

The chassis still came standard with the heavy-duty suspension components like shocks, springs, performance geared rear axle, anti-sway bars and dual-exhaust. To put all that power, from the now standard 421-cid V8 with 4-barrel carburetor (producing some 338 hp), to the ground, a new 3-speed Turbo-Hydramatic automatic transmission was optional. Still standard was the heavy-duty, full synchro-mesh; 3-speed manual transmission with Hurst shifter and the option of a 4-speed manual transmission with Hurst shifter was also available. A Safe-T-Track limited-slip differential was an option, as well as two other versions of yet, even more powerful 421-cid V8’s, with 356 hp or 376 hp depending on your desire. The latter was stated to achieve 0-60 mph in just 3.9 seconds (however, rumor has it that, this Poncho was specially tuned when tested).

For 1966 the Pontiac 2+2 (which was its own model for this year only and dropped the Catalina badging altogether) was not much different than the 1965 . The easily identified, 2+2 only, louvers or “gills” were now located in the rear quarter panels near the door’s trailing edge, the “2+2” badging on the rear decklid and quarter panels, “421” badging on the front fenders and the dual-lens rear taillights were also an easy way to identify the 2+2. Still standard were chrome valve covers and air-filter housing, heavy-duty suspension components and a new bucket seat design. Engine and transmission choices remained the same as 1965 models, but a new-fangled, two-stage, low restriction exhaust system was standard, which used dual mufflers with dual resonators (which were located at the rear of the vehicle). Some of the other available options were front seat headrests, tachometer, Superlift air shocks and transistorized electronic ignition.

For 1967, the last year of the Pontiac Catalina 2+2, the vehicle received yet another, more significant facelift and body enhancements and was now only available with the 428-cid V8, with 4-barrel carburetor, producing some 360 hp as standard or a factory tuned 428-cid, Hi-Output V8 with Quadra-Power 4-barrel carburetor and tuned to produce about 376 hp. Some of the new body features were outboard; wedge shaped front fender tips and integral bumper and grille area, hidden wiper blades, a protruding beltline or mid-body crease running the length of the vehicle and dual lens, rear tail lights that curved downwards at each outer corner to meet the bumper. Unfortunately, due to lackluster sales, the 2+2 would become a dinosaur and not return after 1967, but would be a fabulous memory of the days when the largest, most behemoth Musclecars, roamed freely about and tore-up the pavements of the world.

Find a classic Pontiac Catalina that you love!