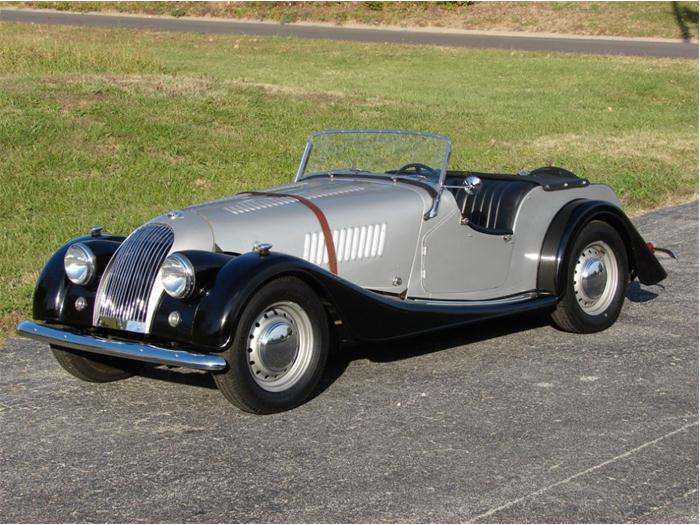 The 1956 Morgan Plus Four (or +4) model, was produced in Worcestershire, England.  It was powered by Triumph’s TR3 (and later TR4) based, in-line 4-cylinder engine displacing 1991cc’s and producing nearly 100hp. Harry Frederick Stanley Morgan (known by his friends as “HFS”) started his company back in 1910, with the idea to produce a light weight, economical, but sporty vehicle for himself to drive.

See all Morgan Plus-4s for sale

The original Morgan vehicles were of a three-wheeled configuration. The two wheels up front were outboard, steered, sliding-pillar design and independently sprung, and the rear had a single, driven wheel. They were powered by a 2-cylinder, V-twin style engine. The Morgan Plus Fours were light weight, agile, spirited and most of all . . . just plain fun to drive. The first Morgan 4-4 (4-wheels, 4-cylinders) cars were produced in 1935/6. The updated Morgan 4-4 or Plus Four, four-wheeled models made their debut after WWII and were an instant hit with sports car enthusiasts from around the world, but mostly in the good ole U.S. of A.

The Morgan Plus Four was first introduced to the world in 1951, but it looked nearly the same as it had since 1935/6. It wasn’t until 1954 that the body got a facelift. It became more streamlined and curvaceous upfront with a distinct sloped back rear body. The grill changed from the outward protruding, flat-front, radiator/cowl configuration to a concealed radiator with formed grille and smooth front cowl area. The frame and chassis of the Morgans were light but sturdy units of stamped steel. They supported ash-framed, steel-over-wood designed bodies of various light weight materials (even an all-aluminium body, as the Brits would call it, was available) and are completely hand-built even to this day. It had such upgrades as four-wheel hydraulic brakes, a longer wider stance ( a bit more hefty all-around) and upgraded interior amenities over previous models.

Early competition events were commonplace for the “Moggies” (affectionately nicknamed by their owners and admirers) and they always fared pretty well, even winning the 1913 French Cyclecar Grand Prix at Amiens, France. Morgans, old and new, are entered in competition all around the world even today and always perform quite well. As they have been for over 50 years, Morgans are always in high demand, with waiting lists for new vehicles ranging from 2 to 5 years and were sometimes as long as a 10 year wait.