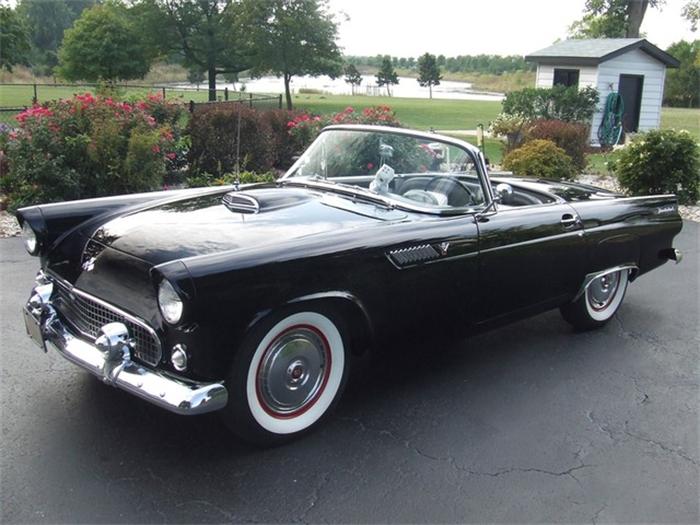 Henry Ford II’s answer to the successful launch of the Chevrolet Corvette in 1953, came in 1955 as the Ford Thunderbird (1st generation, 55 through 57 T-Bird). Backtrack a couple of short years…. after a visit to Europe in the early 50’s, Henry Ford II decided he wanted to build a 2-seater, convertible sportscar for the American public. He had also heard rumors, to the effect, that Chevrolet was working on a similar sporty concept vehicle made of a new lightweight material and so, he was further inspired to push his designers to come up with a competitive vehicle. He sought out and commissioned Vince Gardner, formerly a top designer with Cord Automobiles, to design a lightweight, 2-seat roadster for the Ford Motor Company. The result was a beautiful, yet European-looking vehicle named the Vega (also, ironically, a name used later on by Chevrolet for one of its models).

See all 1955 Ford Thunderbirds for sale

The Vega, completed in 1953, ended up a one-off, aluminum bodied, 2-seat sportscar with many styling characteristics borrowed from the Cord/Auburn automobiles including hide-away headlamps incorporated into the front fenders. Unfortunately, it proved to be much too costly to put into production and besides, Mr. Ford was looking for something more modern and American in the style department. So, back to the drawing board and a team of FoMoCo designers came up with the Thunderbird, so named, after a mythical “Bird of Prey”. Oh, and the Vega sat in the Ford Rotunda Exhibition Center for many years in Dearborn, MI, until it was eventually sold at the 2006 Barrett-Jackson Automobile Auction in Scottsdale, AZ for $385,000.

The excitingly new Ford Thunderbird was quickly pushed into production and by October 1954, they began to arrive in dealerships across the country, thus, the 1955 T-Bird was born. Although inspired by and built to compete directly with the Corvette, Ford maintained that it was more a personal luxury vehicle and not just a sportscar. This must have appealed to the public, as in 1955, Ford sold a whopping 16,155 units, against the Corvette’s 700 units for the same year. Complete with its non-functional, yet stylish, hood scoop and front fender vents and borrowing many other characteristics from its Ford siblings of the era; it really took off. One of the few changes for 1956 was the addition of an extended rear bumper area to accommodate a continental kit spare tire arrangement intended to improve trunk capacity. This, however, was dropped in 1957, as it created undesirable steering issues due to the added length and weight in the rear of the vehicle.

Question of the Day: Who is your favorite car parts company?