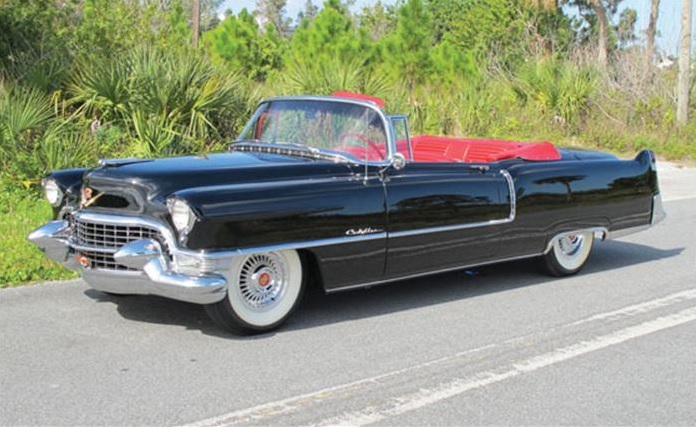 The 1955 Cadillac Series 62 Convertible was a beautiful, behemoth of a boulevard cruiser that enjoyed quite a reputation for not only great looks and elegant luxury, but was no slouch in the performance category for such a large, heavy (weighing in at approx. 5,000 lbs.) vehicle. This was the fourth generation, 1954 to 1956, in the long run of the Series 62 models from Cadillac (fourth out of seven total generations of the Series 62, beginning in 1940 and running through 1964). This was a lower, more streamlined version of the third generation Cadillac Series 62 models and came with many refinements and updates. Cadillac was at the top of its game, globally, in the luxury car segment and you knew you had “arrived” if you were “well-heeled” enough to be the proud owner of one of these babies!

The hood (and entire body for that matter) was lower and smoother and the grille was styled with an “egg crate” design that was further enhanced by a pair of large torpedo or “Dagmar” protrusions which were attached to the left and right, inverted gull wing bumper extensions. Chrome was used heavily throughout the vehicle to add to the flashy looks, but was tastefully done, not overdone. The headlamps were surrounded by stylish, chromed visors and the parking lamps were moved directly below the headlamps. A chromed ventilation “grille” stretched across the base of the “Eldorado” style, curved or “wrap around” windshield. Touches of the famed automotive designer, Mr. Harley Earl, were evident throughout the vehicle including the larger rear tail light “fins”. The gas filler was still located (or hidden) behind a door, just below the left rear tail light. The rear bumper was updated and the large, vertical ends housed a port for each of the dual exhaust pipes to exit. The rear of the vehicle loomed very large to anyone who pulled up from behind and below the trunk-lid were six chromed, vertical molding “fins” which complimented the two vertical bumperettes on either side of the license plate mount.

Under the hood of the 1955 Cadillac Series 62 was a 331 c.i. V8 pushing 250 (stated) hp attached to a three-speed, Hydra-Matic, automatic transmission and reaching a zero to sixty mph speed in, comparable to size and weight, a very comfy 11 seconds. The wheelbase was stretched to 129 inches and the overall length of the monster was about 223 inches, the overall width was about 80 inches and the overall height was about 62 inches. A 12-volt electrical system was now standard, as well as power steering, automatic windshield washers, tubeless tires and aluminum alloy pistons. Very large drum brakes (12″ x 2.5″) were on all four wheels to help bring this lead sled to a halt (that and a prayer) and the turning radius was around 24 feet or about three full lanes of pavement!

The Drive With Alan Taylor: Into the wild with the new 2022 Subaru Outback Wilderness

Question of the Day: What is the best car you’ve owned?