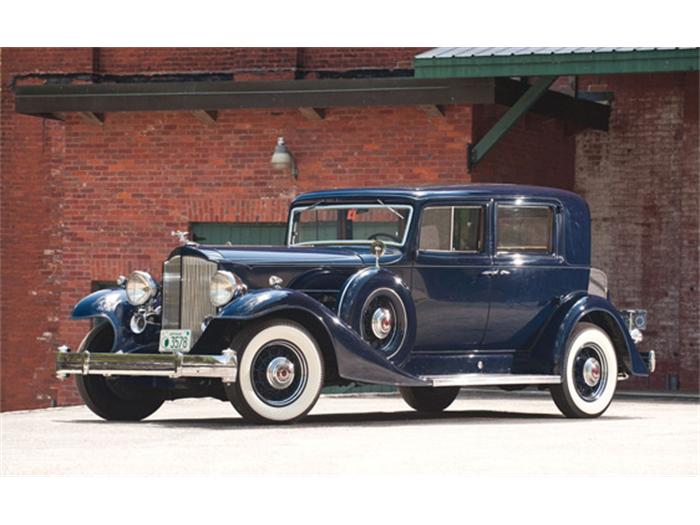 The 1933 Packard Twelve was the second year in a production run, from 1932 through 1939, of the awesome Twelve series (of which a total of some 35,000 vehicles were produced over that period). These expensive, powerful and reliable cars were manufactured to exacting standards by the Packard Motor Car Company in Detroit, MI.

James Ward Packard, the founder of the company, had started the company up in Warren, OH in 1899 to build the Packard vehicles, with the idea that he could build a better car than the “Winton” he had purchased. From meager beginnings with small, single-cylinder, driven motorcars, the Packard brand, would eventually become the “supreme combination of all that is fine in motor-cars” and one of the finest vehicles in the world (especially for the price). Considered one of the three “P’s” (Packard, Pierce-Arrow and Peerless) of American motoring Royalty, Packards were built to higher standards and proved to be very reliable in every aspect.

When their new 3,500,000 sq. ft. production plant opened, in Detroit in 1903, it was the most modern automotive manufacturing facility of its kind in the world. In fact, by 1929, more people owned stock in Packard than any other company, except for General Motors. Packard concentrated its efforts on building up-scale automobiles, specifically for wealthy customers both here and abroad.  This proved to make Packard, the Social Standard of the American public.

The Packard brand lasted some 59 years, from 1899 through 1958, and is still one of the most revered automobiles in the history of motoring. The Packard brand always brings the big money at auctions and are truly, a solid investment.

Some significant changes were made to the styling and chassis of the 1933 Packard Twelve series. The 142-inch chassis, was stiffened-up with the introduction of their new tapered X-Frame which included cross-member bracing and the new 17-inch wheels were smaller than those used on previous models. All Packards were rigorously tested to ensure quality, performance and reliability.

The mammoth, 445.5-cid, V12, 160 hp, side-valve engines were run for an hour by a large electric motor before being initially started. After that, they were run for another six hours under their own power before being installed in the vehicle. Then they spent another hour being run and tested on a dynamometer and finally a thorough road-test (of approximately 250 miles) was performed. A single, dry-plate, vacuum servo-boosted clutch assembly coupled to the three-speed, selective, synchromesh manual transmission, hypoid-gear rear axle, Bijir central chassis lubrication system, “Ride-Control” adjustable shocks, driver-adjustable, vacuum-assisted, freewheeling mechanical drum brakes, a new “Stromberg” downdraft carburetor which included an automatic choke mechanism and fast-idle circuit, and of course the “Packard Stabilizer”, chassis vibration dampers incorporated into the front bumpers, were featured.

The updated exterior featured the clamshell styled fenders complete with skirting and all the usual Packard finery. “V” type radiators with body-painted cowling and thermostatically-controlled shutters was standard, as well as, the new controlled body-ventilation system. The interior was also upgraded, refined and treated to a lavish looking Carpathian Elm Burlwood dashboard with American Elm accents. The speedometer now included a tachometer and the electric fuel gauge also contained an oil level read-out. Luxuriously appointed and custom interiors were the norm at Packard and the vehicles could cruise, smoothly and quietly, all day at highway speeds of 60 to 70 mph. Due to a torque rating of 322 lbs/ft, the Packard Twelves had a quick take-off from a standing stop and could effortlessly reach close to 100 mph at top speeds, making it one of the fastest cars of its day.

In fact, Maurice D. Hendry, a top authority on Classic Cars in New Zealand once stated “If you set out to design a luxury car that would have high performance, but be far quieter and smoother than a Duesenberg; that would rival the refinement of the Cadillac V16, but be mechanically simpler; you would have your work cut out for a start! . . . But, if in addition, you sought a car Europeans rated superior to the finest Old World contemporaries, you would face a monumental task. If you succeeded, you’d be able to congratulate yourself on a job uncommonly well done. Packard succeeded!” (This was printed many years ago in “The Packard Cormorant”, the magazine of the Packard Club.)

Find a classic Packard Twelve Series that you love!