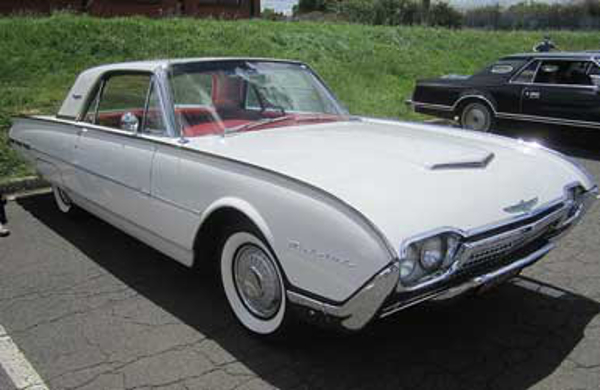 The 1962 Thunderbird offers two different models for classic car buyers to choose from. One is the Landau. This model originally featured vinyl roofs and simulated S bars on the sides. The introduction of vinyl roofs on the Landau was the beginning of a popular design trend that continued for Thunderbirds over the next twenty years.

See all 1962 Ford Thunderbirds for sale

The other 1962 Thunderbird model is the Sport Roadster, a limited production model. This model originally featured special upholstery on the seats and chrome plated Kelsey-Hayes wire wheels. The Sport Roadster was also designed with a fiberglass Tonneau cover, that makes the vehicle look like a two seater. The Sports Roadster is considered the more exciting of the two 1962 Thunderbird models, by classic car enthusiasts.

Before we discuss innovations include the bases. The style was influenced by fashion, “Kalifornia Kustom” of the early 60s, the model 62 had a redesigned grille with four horizontal lines with small bright vertical bars. In front of the grid a “jaladera”. Moldings were replaced “stacked” in the back of the compact model 61 by a horizontal dashed line. After the spring, some cars were built with a horizontal chrome line along its side. Large, round taillights brand attributes were decorated with more chrome.

To appreciate the stature of the Thunderbird at the time, we must consider that in the period 1961-1962, the base models of Ford and Chevrolet only included directional, sun visors, and oil filter as standard equipment. The list of equipment for most cars was two to three long lines. In contrast, the T-Bird 1962 was equipped with almost all car accessories fitted quite well today (one difference may be the air conditioning, which is more common today). The T-Bird was also appreciated as extremely quiet, in a time when ordinary cars were noisy. About 45 pounds of sound-absorbing materials were placed in the car, including the isolation of aluminum, felt or fiberglass putty were applied to the roof cavity of the rough, board, instrument panel, passenger floors and floor trunk, roof panels, trunk, and panels of the compacts.

There were some additional revisions to the 1962 Thunderbird. A manual emergency brake, slight changes in trim, and adjustments in the indicators of the board were some of them. Below the car, a zinc-based coating was applied as protection against oxidation. Also applied three coats of primer or primer. On top of this, two coats of enamel “Never Wax.” Aluminum muffler also been upgraded with stainless steel sections in some critical parts in the exhaust system, such as resonators.

The T-Bird engine were made improvements in the intake system. Only in the carburetor were made 15 improvements plus the addition of a fuel filter that worked for 30,000 miles. The oil filter life also extended to intervals of 4,000 or 6,000 miles by removing a valve. At this point, most cars used antifreeze that required change almost every year. Thunderbird buyers were given a permanent anti-freeze protection to -35 degrees and had to be changed every two years or 30,000 miles. Taimen had better brakes. It said a larger master cylinder would increase the efficiency of braking with less pedal pressure. For durability and strength will be new materials used in mechanical brake. However, the T-Bird was three years of having disc brakes, something that fans of the brand thought very necessary.

Outside, 18 colors were available for simple Hardtop. Twelve of these colors were unique to the Thunderbird. A color, Blue Diamond, was added during the model year. Including Blue Diamond, there were 21 combinations of two tones. Nineteen interior options were available in four models of the Thunderbird in seven basic colors. The seats came in full on vinyl seven options, five options in vinyl and cloth, and seven full leather options.

1962 Thunderbird seats were low and soft. The heater controls and a glove compartment were incorporated in to the center console between the seats. The steering wheel moved 10 inches to facilitate entry and exit of the car, but it only works when the transmission selector was in Parking. Car and Driver (August 1962) mentioned “wide opening doors and generously sized interior” in both models. However, the magazine said that when setting back the front seats reduce the space for rear passengers’ knees and even then, the front seats do not fit enough to handle with arms outstretched.

A quick look at the 1962 body codes shows that the four models had only two different model numbers. This means that the differences between cars of similar body was in the ornaments of the chassis, rather than the body structure. There was only a minor difference of importance in the shape of the windshield or the roof line, Ford had used a different code to distinguish the cars. Both bodies had the same form of “projectile” front end and design of dual jet pipe at the back in 1961. The hardtop roof was again the trend of formal style. The convertible had a deck in the rear seat folded up and hidden mechanism “accordion” that Tom McCahill joked in May 1962 Mechanix Illustrated magazine.

“The first time I went down the roof, I thought the car was about to eat itself,” Tom McCahill said. “The roof of the rear seats opens, the panels are unfolded, the roof is straightened up, all accompanied by a noise similar to a missile launch. The spectacle of this operation is sufficient to cause thrombosis of a playboy 3rd Avenue slightly intoxicated. The total operation are seen as fellow woodcutters Buck Rogers of Abraham Lincoln and the end result, though the roof is successfully hidden, leaving less space in the trunk in a Volkswagen. ”

The convertible was the basis for the Sports Roadster. A large lid “tonneau” fiberglass made it a two-seater car. The convertible roof has to be hidden in order to install the cover and the cover can be installed or removed in less than three minutes. A Tom McCahill liked the idea of a conversion to two places and said “This vibrating glass fixture saw the T-Bird as an Easter hat parade.” Going back to 1955 (the system of baldness that Tom McCahill was used to define dates, “when he was three more in my bald hair.”) The writer had created a record of the T-Bird in speed on the track at Daytona. He liked the two places. But Uncle Tom was at the question of what to do with the cover to be away from home. “I could work in a slightly larger problem that is in the Congo,” he threatened, referring to a political issue at the time.

The British magazine Motor Sport, said that the tonneau cover was “made of thin fiberglass” and questioned if this could cause annoying noise. However, the tonneau cover was very well designed. The section of the headrest was shaped like a horseshoe to adjust on the chair seat Thunderbird. A secure early release was holding the transmission tunnel between the seats. The tonneau slipped below the top of the rear seats to be attached to the rear. You could add or retract the convertible roof tonneau cover in place. With the lid on in the back seat was a hole, this allowed to keep small items from sliding below the deck, cushioned by the back seat. Access to this “hiding” was achieved simply by folding the front seat forward.

The Sport Roadster for some, resembled a toy car racing spoiler with two figurines in the front seat. Tim Howley, author of Collectible Automobile, said he gave the impression of a large aircraft with the pilot and copilot sitting in the front. Car Life magazine compared the large area between the seatback and the rear of the car with the cover the aircraft carrier USS Enterprise. The equipment also included Sport Roadster Kelsey-Hayes wheels ray-top nut, a fastener for the front passenger, special badges to the front of the compact front below the letters Thunderbird, and wrote off the tail of the compact rear. Tom McCahill said, “The Roadster is the only Thunderbird wheels with spokes and simulated as a nut cup.”

However, Car Fax 1962 lists it as a regular T-Bird plus a cost of $262.90 for distributors and additional suggested price list of $372.30 dollars. The Tim Ford Howley expert agreed that this was the case. It is possible that other T-Bird wheels have been sold with lightning and simulated nut cup. The tail of the compact was removed from the Sport Roadster due to problems space with simulated nut cup, but the restorers have found a way to put them. The compacts also open allowing greater ventilation for the brakes and the car make it look more sporty. The rays wheels do not work well with tubeless tires.

The new model “forgotten” was the Landau or Landau Hardtop. It was produced with a cover in black or white vinyl roof. The cover was designed to look like a leather cover. To reinforce this impression the ceiling was decorated in a more classical. “The Landau has, as might be expected,” Landau Ornaments “vertically and attractive sides of the roof panels,” reported The Motor Sport. “It’s a very nice combination with genuine leather upholstery optional . The number of built Landaus was not recorded separately, but the model Hardtop pushed sales at more than 7,000 units.

The performance of the T-Bird Road remained largely unchanged since 1961. The standard engine of 390 cubic inch V8 with 300hp gave the Thunderbird enough speed for a typical buyer of the T-Bird, though not a Muscle Car McCahill reported an average of 9.7 seconds to take the car from zero to 60mph in Sport Roadster weight of 4.530 pounds. According to Motor Trend (September 1962), in a Sport Roadter of 4.842 pounds of weight in the same test they showed a 11.2 seconds time. Car and Drive Management 11.3 seconds in a convertible than 4,400 pounds. It is possible that the aerodynamic properties of the tonneau cover has made faster Roadter Sport of McCahill, although the proximity of the two results suggests greater accuracy. The great engine of T-Bird ran smoothly and quietly tore most of the time. Car and Driver said, “is nearly undetectable.” The Convertible Car and Driver recorded a top speed of 110mph, while McCahill said his Sport Roadster arrived at six miles more than that. (Probably the old Tom is not calibrated the meter). Motor Trend said “an honest 107mph in our Weston electric speedometer.” An optional engine was available in 1962. His production was limited, “tell me that under pressure and with the help of a member of Congress, it is possible to order the T-Bird with a more powerful engine” joked Tom McCahill. This engine was a version of 390 with three Holley two progressive carburetor throats, a compression ratio of 10.5:1 and an aluminum air filter distinctive. Known as the power plant Code-M was capable of generating 340hp and 430 lb-ft of torque at 3200 rpm. Car Fax showed that the engine had a cost to distributors of $ $ 171 and $ 242 added to the selling price.

Although hard to believe was true, so it only took 120 Sport Roadster M. Code A M Roadster could reach 0-60 mph in about 8.5 seconds and reach a top speed of 125 mph. Although the T-Bird was a sports car fast, it was not a Muscle Car fast. The management was slow and vague and inadequate to conduct themselves in corners. Professional management techniques were necessary for driving gear corners closed due to slow response and leadership position. “These are shortcomings that most owners never meet,” said Car and Driver. Motor Trend rated the car as fast, but printed a photo caption in criticizing the chassis. There were problems in the mechanics of the braking system. The brakes work very well under normal conditions, but the mechanisms were warming rapidly and lose their braking when driving at high speed. It was necessary to wait a long time to cool the brakes to work right again.