Christmas present from the Petersen: The vault is open for tours 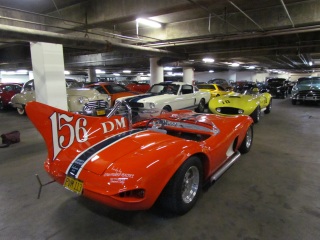 The Petersen Automotive Museum in Los Angeles has a Christmas present for car guys and gals: Starting December 15, the museum opened its vault, the underground section of its parking structure where it stores vehicles that are not on display in the exhibitions inside the museum proper.

There are dozens of vehicles in those exhibitions, but that still leaves two or three hundred hidden away — until now.

“It’s a part of the museum that has become almost legend,” said Chris Brown, the museum’s information and marketing manager. “If you’re an enthusiast, you’ve heard about the vault of great cars at the Petersen. We get more and more people who keep asking, ‘hey, how do I get down in the vault? ”

You now can do that by signing up for a guided tour. Each tour is limited to 10 people, runs for 90 minutes and costs $25, plus the regular museum admission.

At the moment, those tours are offered only on weekends. But, Brown promised, “if it proves to be as popular as we hope it is, we’ll extend it throughout the week.”

Brown and the museum’s new director, Terry Karges, recently offered me a pre-tour sneak peek of the vault and it was amazing to see what’s there, including several cars formerly owned by Steve McQueen, a couple of concept cars, the bulletproof limo the White House ordered the day after the bombing of Pearl Harbor, and the specially built Ferrari used in the TV show Magnum P.I., specially built so actor Tom Selleck could fit inside the cars tight cockpit.