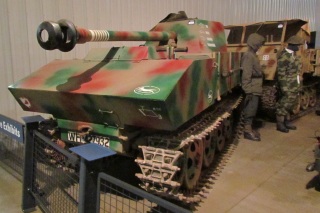 Dean Kruse may have stumbled in the late stages of his career as a classic car auctioneer, but his dream of a museum preserving American military machinery not only will live on but will be able to expand in scope in the aftermath of an auction at what is now known as the National Military History Center in Auburn, Indiana.

Kruse searched throughout Europe to find tanks, trucks, rocket launchers and other military equipment used in World War II but discarded after the war. He bought nearly 200 vehicles and was ready to ship them to the museum he was building in northeastern Indiana when 911 occurred.

In the aftermath, instead of merely shipping his purchases, Kruse needed an act of Congress to allow the import of his used military equipment. But the bill passed and Kruse’s purchases arrived and his museum opened.

However, along with the rest of his holdings, the museum suffered financial setbacks and faced a mortgage of some $2.9 million. To pay that mortgage, keep the museum operating and to make room for military equipment not only from WWII but from other wars, including the American Revolutionary and Civil Wars, the museum staged an auction, selling some 80 vehicles — nearly half of Kruse’s collection — as well as WWII uniforms and other military gear from that era.

The auction, managed by Auctions America by RM, generated hammer sales of more than $2.97 million.

Several of the pieces were bought for display at a museum in Europe. Several bidders said they participate in WWII battle reenactments that are becoming popular in the United States. (One man said his son and daughter-in-law are re-enactors — medic and nurse — and that he wants to participate as well, but not as an infantryman and that people who bring veteran vehicles to such events automatically earn higher rank.)

Others bidders said they planned to drive their purchases in parades and to display them at shows and other events. Still others said they simply wanted the 4×4 capabilities of the retired military equipment to enjoy on land they owned.

Question of the Day: Do you like the Chevrolet Corvair?