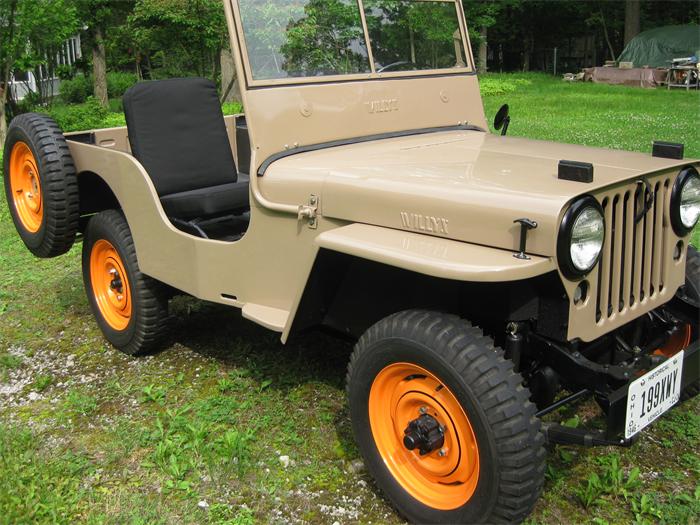 The versatile “JEEP” (or was it “GP”, short for general purpose vehicle or maybe even a nickname borrowed from Popeye’s sidekick of the same era), was the nickname given for the launch of the 4X4 vehicle which was designed and built by several of the WWII era automobile manufacturers of the time.  A venerable little vehicle, requested by the U.S. military leaders of the time, specifically for the troops to use during WWII. Dwight D. Eisenhower once said “it was one of three decisive weapons the U.S. had during WWII”, which he also credited with being a big part of the allied victory as a whole. In fact, even the Russians were so inspired by the useful small vehicle that they designed several variations of it shortly after the war, as did many other countries and manufacturers worldwide. No other vehicle in history has spawned so many descendants than, the little “Jeep” that could, of WWII history.

See all Jeep Willys for sale

As convoluted a story as to who really gave it, its true beginnings, is the origin of the name JEEP. Several versions of where the now infamous name came from, range from a cartoon character named Popeye, who had a strange, yet clever little sidekick named Eugene the Jeep, who was small, jungle like, character who could maneuver quickly about and had the ability to solve the most difficult problems with ease. Or, possibly from sound of the U.S. Military designation of “GP”, which referred to general purpose or government purposes use. Or, was it the slang term, “Jeep”, which was commonly used by soldiers for any untried or untested piece of personnel or equipment, such as a new recruit, a new weapon or new field gear, etc. Whatever it was, it stuck and history has been made ever since the introduction of the 4WD “Jeep”. The world over has also recognized it as a symbol of rugged individualism, born by necessity, in the good old U.S. of A.

Back in July of 1940, the war in Europe was well under way when, the U.S. Army reached out to some 135 U.S. automobile manufacturers and challenged them to create, design and build a vehicle to some pretty daunting specifications. It had to be four wheel drive, be able to carry a crew of three, have a wheelbase of 75 inches (this was later changed to 80 inches) and a width (or track) of 47 inches, powered by an engine of at least 85 ft.lbf. of torque, have a fold-down windshield and able to carry a payload of at least 660 pounds.  Also requested, and possibly the most difficult criteria to meet, was the empty G.V.W. of 1,300 pounds.  Only three of the 135 companies felt they were up to this challenge and supplied bids to the U.S./ Army, they were Willys-Overland Motors, Ford Motor Company and American Bantam Car Company. Even though Bantam won the bid, all three companies actually manufactured their similar, yet individual designs of the vehicle for the Army, mainly due to the quantities they demanded and the extremely short time-frame in which they required finished products, in order to supply our troops and allies overseas.

By July of 1941, however, the U.S. War Department had decided to standardize the vehicle for ease of production, logistics and mainly for parts replacement out in the field. They ultimately chose the Willys model “MA” (Military Model A, mainly due to it’s more powerful 60 hp, 105 ft.lbf., “Go-Devil” engine) but had them incorporate the best design features of the three manufacturers into one new model, which they designated as the “MB” (for Military Model B). The rest, as they say, is history and over 647,000 of these “JEEP” type vehicles were produced during WWII by the three different companies. Most every 4WD vehicle of today can credit the innovations and versatility of the “JEEP” for their existence. And that’s the way we do it here in the good old U.S. of A.

Find a classic Jeep Willys that you love!

Question of the Day: What is your opinion of the Toyota MR2?